-
This place alternates between selfie-stick hell, and placid warrens of side-streets where people go about their business, most likely in front of a church. Tempting to call it a sort of Italian Disneyland - there are so many tourists on the main strips it-is-ridiculous.
Bleakness though:This place probably exists for tourists like nowhere else - 20m visitors a year, half of them daytripping from cruise ships or elsewhere 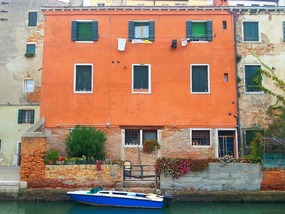 Car parks are out front
. The cruise ships are so big they raise the tide and damage the city, and the tourists drive up the price of accommodation so that it's almost totally unaffordable for people to actually live there. And the city will be underwater in about 80 years. Bleak.
Not bleak:It's a beauty! Canals, quiet side streets and old houses aren't a bad combo, and make wandering around a pleasure if you're comfortable knowing you could end up, well, not far away but a difficult path back to wherever you were - or you might end up there anyway. There is no definitive map of Venice anywhere, and GPS only mostly works.
Walking tour took us from somewhere to somewhere else, but good times showing us what Venetians do when it floods (tables to walk on, barriers in their doorways), cat-sized rats (yeah right), many churches, Roman refugee/settlers, average pizza because wood fired ovens could burn it all down, and the reason for the masks (basically anonymity while going to the brothel or when you just can't be stuffed talking to anyone).
Word of the day: 'Prego'. Use it anytime, for anything.
St Mark's Basilica is a medium sized thingo with very golden ceiling murals, but my familiarity with these buildings by now maybe precludes any 'awe' that some feel? Well it had to happen sometime.
Also:- The rats are bigger than cats (maybe) but are the reason the hospital keeps 30 cats on staff.
- Talking to a couple on the train they told me about language difficulties trying to ask for cheese 'a coffin full of cheese' and a bed for two females (two females to bed?). Hi-lar-ious. Europeans probably too good at English now for that. 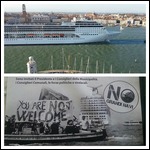 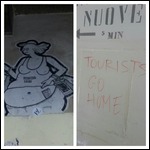