-
Writing this on my last morning in CQ. While waiting in a shop/bar/whatever for the rain to stop, some late-middle aged American woman catches some of my conversation with an Aussie girl from the hostel who I "might see" in Florence. Thinks we're all terribly romantic (in the adventurous) sense and compares it to the movie The Wild which might be a stretch.

Arrive Wednesday evening at Ostello Tramonti in the village of Biassa 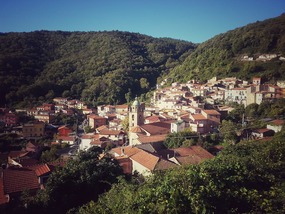 My fair village of Biassa
...somewhere in the hills away fro La Spezia. Met a few Americans at the bus stop, makes a change from all the Aussies, but maybe now that Oktoberfest is over they're all going home? Immediately go to find "crumbling gothic church" down the road. Couldn't find it - bad sign, maybe. Dinner in the tiny hostel restaurant.

Day 1: Weather= stunning, feel pretty smug about coming here in shoulder season. Feeling cocky about a coastal walk that is shorter than its normal 12km because of storm damage a couple of years ago, so hike down to 'main' village of Riomaggiore...similar to the "insane" views of Éves in France, except this time views of hill (cliff?)-side vineyards and the ocean all the way to the horizon. 'Splendid isolation' with no one else around, nothing like it. Come across a hostel that I think I looked at online where you basically stay under your own tarp on the hill...awesome if probably pretty sketchy in the wind. Riomaggiore is everything it's meant to be - colourful houses spilling from the cliffs almost into the sea 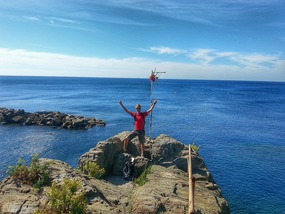 Very premature victory panorama
. Curiously some lower houses have larger tidal barriers in their doorways than in Venice.

Splurge with trattoria(?) Pasta and wine. Brazilian woman next to me tells me how her gym in the US actually *simulates* famous hikes from around the world, so in a way she's been to NZ's Milford Track. What.

Carbo-loaded. Lucky because this coastal walk is harder than I thought..go up from Monterosso, then flat for a bit, them down to Vernazza, the middle village. Hard going...and back up and down again for Corniglia, where after all my stuffing around (I.e. breaks taking in scenery and villages) I'm pretty tired and full of cliffside bar smoothies so call it quits and have a beer with some Bostonians. Plenty of time to take a train to Riomaggiore to meet up with a random American guy (Tifyek?) I took a huge panorama photo for. Turns out he couldn't make it so takeaway pasta and a sunset instead. Back to the hostel for chats and merrily ripping on an Aussie who kept saying stuff a drunkish American guy didn't understand

Day 2: check out another village with two aussies from Narooma. Pretty average but at least it had a small castle. Portovenere way down the other end much more interesting with a large castle (with cliff side houses constructed as forts to fend off those awful Pisa types). Right knee getting a bit dicky but I'll rest tomorrow on the train? Smart...probably not.

Back to the cheerful car horns, wine, pizza and hostel chat of Biassa. 3/4 full glasses of house wine seem a bit unusual but must be because I'm basically Italian now - said ciao a few times and everything. Also met a 'Kiwi' not super-interested in the Rugby World Cup. Troubling.
Still trying to definitively figure out 'prego'. Will ask.

Have noticed Italians expressing their approval of my food/wine/coffee choices, must keep this up somehow. 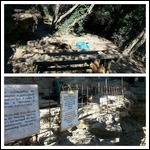