-
Not that I've seen TOO much of it, but have officially had enough great Renaissance art - how those guys were content incorporating basically just, heroes, Biblical and classical references into their work for such a long time is a little beyond me.
Life lesson-type things: Ben from Perth was pretty set on not living his own six month holiday how others think he should e 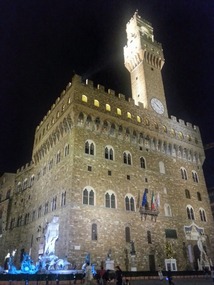 Palazzo Vecchio
description
.g. two days in Florence without museums and not stopping in Rome on his way to Naples. Could say 'terrible', but the way others are so resigned to doing things like going to The Louvre just to see the Mona Lisa or to any number of other gallery museums is a little bleak, like it's their duty to go to these things rather than something they like or are curious about. Ben's position = respectable. Caught a few pizzas, beer and wines with him and a few English types (kate &anthony and others) most nights, including somehow three visits to the local Irish pub...though to be fair two of those occasions they were showing rugby...watching the ABs play Namibia was doubly painful with the commentary of a certain Aussie cheering on the Namibians. Painful for Ben when the Aussie crowd went ‘full ocker’ after beating England...pretty funny for me though.
Food day - trip to the Tuscan village of Certaldo for the Boccacesca (sp? whatever) food festival. Maybe subdued because of the rain but when you can get roasted chestnuts & wine (complete with boisterous old italian guys selling them), cannoli, fried cream cubes, gelato and some kind of grape cake it's all okay. And it was even mostly in a castle on the hill. Back to Florence for their own autumn street food festival for socca (or whatever Italians call it), arepas (italian/argentine sandwiches) and choco kebabs. Even caught a game of tamburello between the two venues where two teams basically just hammer a ball at each other on a big court 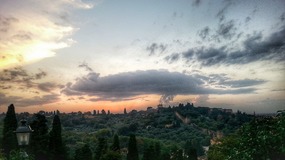 Belloguardo Hill period residences
...with tambourines.
Bite the bullet and pay for a bus tour round Tuscany, one of those very uncool people but hey it's quicker than the trains. Quickly mingle with other lone travellers from Oz (Grace), Gloria (US), and a German and English-Indian guy who's name I don't remember because I didn't see them in Rome or Naples unlike others. We hit Siena, San Gimignano and some small walled village where they filmed parts of Gladiator. Countryside beaut if not quite that impossible postcard standard of rolling sunbaked hills. Siena has some sort of mad horse race in its main square every year, the square being sloped on the sides like a racetrack just because. Trip to a Chianti vineyard for good wine (including fancy Vinsante, get some of that and some biscotti eh), good bread, good cheese, good pasta, just enough wine for the tourists to be merry but not too merry. Buy a week's supply of biscotti for 3 euroes, get outraged at price of a gelato in Siena (5 euros, go jump). Good long day.

Last day, 'hurry up and wait' in line for the Gallerie dell'Accademia aka 'the small gallery with Michaelangelo's David in it' 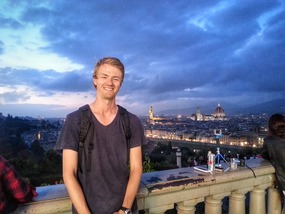 Enjoying another plaza; view
. Caption on the wall next to it quotes someone who basically says 'once you've seen this sculpture, all the rest is trash' which was confusing and amusing...not having any knowledge of sculpture, I'd uncritically agree. Elegant and generally splen-did, plus a couple of other interesting pieces like 'Rape of the Sabines' (not what it sounds like...mostly). And then a bit more Renaissance and/or religious art particularly on St Francis of Assisi who was pretty close to Christ-like apparently.
Florence itself is a pleasant enough place but not the wonderland that perhaps popular culture makes it out to be. One outstanding and climbable romanesque/gothic Santa Maria del Fiore cathedral which towers above everything, and many examples of solid but small Renaissance palaces and other residences and that's it. An extraordinary heritage thanks to Da Vinci, Michaelangelo, Dante etc etc etc too. Caught a tour which went into a bit of detail about some churches and buildings but turns out not to be my thing. Also a bit of slapstick theatre on the ‘History of Florence in 60 minutes’.
FOOD PAGES: Ate a ton of gelato (‘don’t go where they pile it up, pistacchio must be a dull green, ‘artiginale’ has a defined standard, gelato must be covered with a lid’) and several ‘ine up it’s so awesome’ paninis - wild rocket, cheese, truffle, sheep’s cheese instead of prosccutto etc. Simple and cheap, wahey.
Other Entries
- 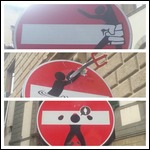 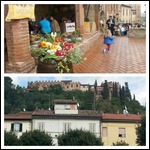