-
BEGIN RANT: Travel is an indulgence, perhaps some would say it is ‘more’ than that but it's certainly a privilege. Being exposed- mostly through the internet but some travelers -to people who see travel as something like their life's mission frustrates me a little. Fun, no doubt. Probably no regrets at the end of it all, but is that something you can say you’ve accomplished, or the contribution you’ve made to a society? Maybe can do both, or do one or the other later. No answers. People won't be happy if they live their lives to make others happy, like 'doing something useful' but having meaningful things I want to accomplish back at work and some vague desire to put my free time/resources into 'something meaningful', somehow, when I return is something I'm very aware of. END RANT

Get another train, to Rome, one week coming up 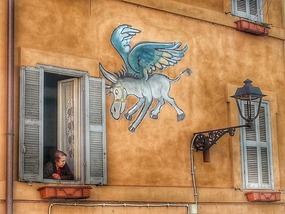 The ass of Trastavere
. Get to weird budget hotel/hostel, dash to Colosseum which is as huge and ancient (and selfie-stick filled) as it looks, though there was a bigger one called the Circo MASSIMO which fitted 250,000 for races -now just a flat field down the road. The ruins of the Roman Forum (the most lavish and important admin buildings of the Empire) and the Palatine Hill (ruins of mansions) certainly evoke Rome's old glories/downfall, and stuff. Get back to hostel, meet Sonya who's first word as I come through the door is "oh". Hi to you too. Thought she was in a women-only dorm. Wrong, pal.

What to do on another rainy autumn day - eat. Testaccio markets and a local cafe get me plenty of cheap espresso, italian style filled croissants, ricotta & chocolate tart, foccacia, weird spinach & mushroom pie and a lot of Italians doing their market thing: yelling exuberantly. Get to the The National Museum of Rome, which is small and makes the history of coinage more interesting than it sounds -such as a propoganda tool - and would have had a magnificent statue of a battered Greek boxer if they hadn't loaned it to the Getty Museum in the LA 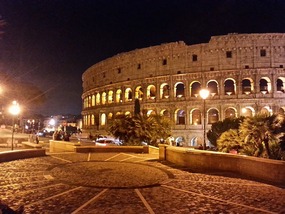 Night time colossal-ness
. Crap. Tried drinking five espressos in a day like an Italian would (by lunchtime maybe) but don't feel much different beyond 5 euros lighter (CHEAP THOUGH).

Eat a ton of pizza and pastries, and of course eat my breakfast pastries standing up at the bar ('al banco') watching Italians hussle through for their espresso/cappuccino (none of the latter after lunch or 'what are ya?'). Eat at reasonable pace but still feel like a sloth compared to them. Gelato generally awesome - ginger-cinnamon stuff by the Pantheon (thanks Louise at work).

Would've been great to see Hadrian's Villa and others in the countryside (round the town of Tivoli) pity it poured with rain. Fellow optimist Gloria and I spending time eating and drinking in Tivoli, returning defeated. Got some great cheap Tiramisu and pasta back in Rome at the Spagna plaza so not all bad...few drinks with Kate and Ant from Florence too wahey. ‘Good sorts’ who taught me that to be English is to apologise for just about everything (‘sorry can I walk your dog as we discussed you paying me for earlier?') 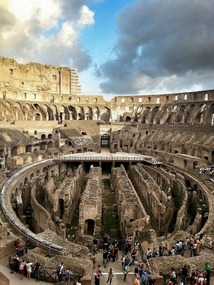 There *was* a floor there (colosseum)
. Kate doing a hell of a lot of travel despite (or because of?) her cystic fibrosis - had a double lung transplant some time ago. Can’t really comprehend. Also total Cat lady.

SOCIAL PAGES: evenings in ‘laid back Trastavere’ with Lauren the Shakespeare actress from Brookyln (even Morgan Ave where I stayed!) and somewhere-near-the-Colosseum with Siegfrieda (ziggy, sp?) the South African of mostly-unrestrained joy at most things - including most importantly my jokes - met on the Capitoline Hill while looking for a sunset. Top people never to be seen again. Have connected with some randoms on FB but maybe not always people I’d definitely enjoy staying in touch with...probably wouldn’t see them again anyway. Right.

Visit to the catacombs of Rome a little outside Rome central - bus out there along one of the first Roman roads connecting the city to another - prettt damned bumpy, presumably decent suspension on chariots. Essentially tunnels under the earth dug by Christians post-death of Christ in order to bury their dead...the Romans actively persecuted Christians as they only recognised one god - you could worship whoever you wanted in the Empire as long as you worshipped the right Roman ones including current/past Emperors. Therefore they weren't allowed cemeteries. Callisto and San Sebastian catacombs visited, both with a guide (one a Christian volunteer from the Phillipines) of course. Callisto has ah FIVE HUNDRED THOUSAND buried, to an extent explained by high child mortality rates in the 300 years of persecution. SS impressively elaborate. A lot of death around but didn't really 'feel it', great to get outside each time though.

Last day- get up early thanks to Feron the drunk Argentine falling onto my bed at about 6am Was going to St Peter's Bassilica with Gloria anyway so no damage done apart from Feron pissing on the floor in the hallway. Get help from reception then hussle to Vatican City to try and beat queues and amazingly do so easily at 8ish. Only 300 steps (easy - good climbing muscles by now) in addition to the lift so 'yes please'. Great views up high as always but spectacular interior of the Bassilica - best religious thingo by a LONG way. Magnificent A dead pope (John Paul?) On display too, weirdly, but somewhat popular with the crowds.

Busy place that surely has more than just 'Roman stuff' (like Berlin and their Nazi/Cold War stuff), but hard to resist seeing it all. The other stuff...next time.