-
The 'bad boy' of Italy has a reputation for being a hotbed of mafia-types and pickpockets. Lots of graffiti but the most dangerous thing the high number of bloody scooters whizzing down the alleways at more-or-less full speed. The formidable one hour long briefing from Giovanni, owner of Giovanni's House hostel put an impressive amount of effort into rebutting these concerns, and giving his strong Ital-ee-an-English opinion on select destinations in Italy -Rome ("fake capital", "not Italian city but Catholic city), Sorrento ('worst place in the world'), Capri ('toy place"). This was after he greeted me and some Koreans with giant plates of pasta and broccoli (sort of broccoli sauce? Chilli, garlic, oil? Must make) which was freakin delicious. Check in while he hugs goodbye to some girls telling them to "act with love". Amazing guy who pretty much seems to live for the people in his hostel. Naples had the biggest opera house, second to get electric lighting, first in the world to have an aquarium, a palace complex bigger than Versailles but barely gets a mention compared to the Amalfi coast. Hes quiet but this annoys him immensely. Thinks Naples is worth about 8 days all up, mostly in Naples, not just Pompeii, Capri, Amalfi etc.

So first day, go to Capri - with hostel types from Poland and Oz, both called Eliza somehow, to Capri island, famous for its Blue Grotto in the ocean (1 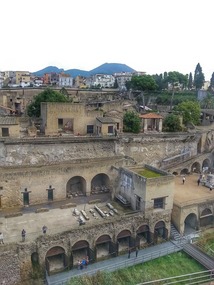 Buried town of Herculaneum and that volcano
.3m high entrance enough for row boat only) means it closes often if there's a little chop...like our day. Take a tiny bus around, get a great view using a chairlift, eat a meal in a waterfront tourist trap (spent a lot of time being outraged at 3.50 euro espressos) and cruised around, without walking to any villas due to the girls wearing jandals and being a bit tired - weird ferry timetables made us leave earlyish anyway, otherwise five hours to kill...might not have worked.

Best pizza in Naples and therefore the world? Gino Sorbillos - clamour like zombies around the door for the 7pm opening and pay 3.50 for a colossal Margherita. Top stuff.

Time to travel with a posse to Herculaneum, Pompeii and Vesuvius. Get to H and most of the group decides it's too small - they were nice enough but loud enough to detract from i tersting history stuff so not really worried. Gloria (Texas) and I stick around, and hey, discover wharves full of skeletons - they tried to escape Vesuvius by boat. Get to Vesuvius with great views and a bit of steam getting out, then Pompeii by train. Much bigger than H (which is meant to be better preserved but that really just seems to mean a few better frescoes, meh) and with an audioguide and Vesuvius permanently in the background it works well. Highlights 'beware of the dog' ('Cave Canem') sign and the ashen bodies kept in a pyramid in their 'colosseum'. Gloria manages to take a heroic number of selfies during the whole day (including a hilariously demented jumping selfie??), baffling but impressive 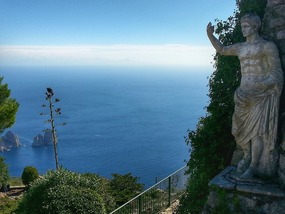 On Capri- famous Blue Grotto down below (rock
.

End the day with ABs v France on TV down the road which is a relief or I would've had to get on a metro to the 'rough' part, or something. Some NZers in the crowd but many more Frenchies. Unbelievably great 63-13 scoreline...it wasnt about revenge but it felt so good. Baffle/teach Gloria about rugby at the same time. Surprised 95% of the French stuck around for the end.

Actually get to see Naples outside of my immediate alleyways and pizza places. Museo Cappella Sansavero easily one of the most interesting I've seen - small, with the Veiled Christ carved to look as delicate as tissue, a man being freed from the carved 'net' of sin in Disillusion and the bizarre Anatomical Machines (human bodies preserved hundreds ofnyears ago, arterial systems and all). Cruise around the waterfront (graffitied of course). Pass time eating too many pastries and Cuoppa Terre (deep fried balls of bread, cheese and veges), 'baba' rum cake stuff - roll to the designer Toledo station and the Naples subterranean tour. Started by the Greeks and extended ever since - some art and relics demonstrate its history as a WW2 bunker, hospital, dump, quarry and aqueduct. Knackered so go back for some planning/photo deleting time.

High-fived by Giovanni("bye bye long man!"), off to Athens.

60 days in Europe to this point, back of an envelope:Pastries: 160 (French breakfasts and lunches; Italian breakfasts)
Pizza meals (slices or whole): 30 (Italy)
Pannini/sandwiches: 35 (basically London and France, some Florence)
Pasta: 3 (random Florence restaurant splash-out, Giovanni in Naples, takeaway in Rome)
Times I nearly rolled my ankle on cobblestones - 10? Might want to pay more attention. 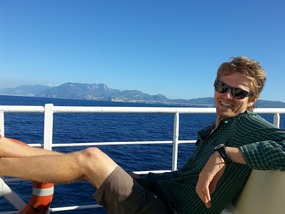