Get in from Naples with a bit of trepidation about a place that has really suffered from the GFC, though to a large extent it seems the country was a bit of a semi-corrupt house of cards anyway

Reposted cos its awesome eh
. Few people mention how they 'hate they Olympics' without really being asked (re costing biklions). Make it to the City Circus hostel round the Monasthiriki (neighbourhood) which is pretty impressive. Obvious realisation that I can't read the local language anymore but seems to be some English text around at least. Street art EVERYWHERE as well as your everyday graffiti. Walk up towards the Acropolis (still don't know what this is, exactly) - basically restaurants and cats.

Can't get any walking tours because they have zero or too many people. Take myself and my internet audio guide to the Acropolis - it was a fort, mosque, temple and gunpowder storage location. Gunpowder due to the Turks' occupation in 17th century which was hit by the Venetians - blew everything to smithereens...so the entire site is basically a reconstruction or repair site in progress, if only for the impact of pollution now. Most of the best artifacts carried off by the British Empire, Turks, or safely in the Acropolis Museum - get to the museum 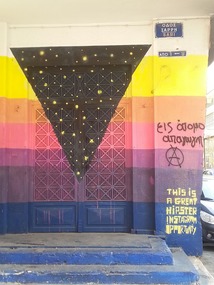 So. Much. Street. Art.
...highlight is the LEGO ACROPOLIS - figurines fighting, singing, sitting or just being what looks like Gandalf from Lord of the Rings at the bottom of the hill.

Wireless access = a reply from a walking tour company saying they have a combined one available in the afternoon with a promotional cocktail workshop at the end. Said 'yes' without asking about the cost - take an opportunity to ask fellow participants about the cost on the way to the workshop and they demure. Turns out the whole thing is promotional, hence the bloggers at the workshop and fellow participants being in the tourism industry. So the entire thing was normally 99 euros but today free, guess I was there to make up numbers. Tour pretty heavy on street art (there's TONS), few anecdotes about plans for the neighbourhoods - mostly these days they make do with zero funding for local events like colour festivals or...chocolate throwing festivals.. Longer day than anticipated but hey got a cocktail and some knowledge that i'll have forgotten in three months. Get nothing done - Turkey coming up quickly. Oh and asia later? No problem.

Second day checking out architecture (the Athens Academy etc, decorated with colours how they would have looked back in the day, guess they got permission to paint them somehow), wandering through meaty markets and junk markets, and the Pan-athenian marble stadium used for the 1896 Olympics including triumph of Spyrios Louis in the Marathon - one of the greatest sporting days for Greece ever, by the sounds 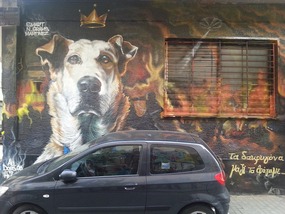 Riot Dog Loukanikos RIP
description
. Eat, walk round the bit where the Athens Academy is, markets etc. Catch up with James (roommate) and we sign up for Tsipouras tasting...basically 5 shots of booze with a bit of food and conversation. Some like tequila, some sweeter...all over the place with this stuff made from old grape skins? Few more ah bonus shots at the hostel and in town but nothing too crazy...and there was a random guy in one of the squares doing fire eating?

Meant to be one of the most beautiful - man made - places on earth. It all feels a bit familiar somehow which probably isn't a surprise considering how often I've seen it in the media. Wasn't quite ready for the almost sheer drops on one side of the island, of course this is where the sweetest hotels are. Weather forecast pretty mixed so arrive before lunch, charge the batteries and get on to that cliffside trail from Fira to Oia - the latter where the best sunsets apparently are 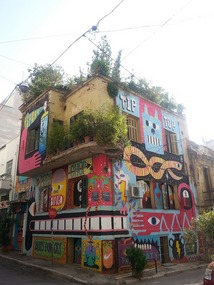 Just more Athens
...sunset hunting basically a sport here as it turns out. Not a difficult walk, but turned from 2.5 hours to a bit over 4 what with the detours to climb large rocks, photos etc. Crowds gather expectedly for the sunset while I ‘just see what's around that corner’...lots of cloud so a bust, but it has a cool glow at night too so not a total loss.
Rest of the three days is spent visiting little towns like Emborio (and getting lost in them) while it rains, touring a lame archeological site (not quite the cash to do much digging at the mo), watching the All Blacks with some other Kiwis in an Aussie bar (pretty sure my accent sounds like basically none of them?) and had a few quiets after one tense game...ran into some Saffers from the bar a couple of times afterwards oddly, plenty of respect between the two groups though. Last day weather looks shoddy but stuff it i haven't been to the volcano, hot springs or Thyrissia island yet so hop on a boat after navigating around the donkeys going down the cliffside path alongside me. End up hanging around with three pommie girls just doing the ‘pop over for four days’ thing...Jem, liza and sam. Bit like guys in the way they constantly hassle each other, good fun. Volcano (and tour guide’s exuberant demonstrations of how this volcano works) interesting if windy. Hot springs on the side of one island not that hot but good to have a dip anyway -off the boat and swim over to the island. Not much on Thyrissia except some decent food that may have had mince in it SIGH 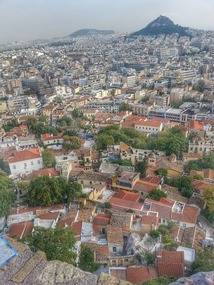 The nice bit of Athens...and the rest
...finish the day eyeing up another...non-existent sunset with the girls and a bit of dinner. Wind burned but a decent day.

FOOD NOTES: greek coffee has about an inch of grounds in it for some reason. Not bad though.

NAXOS ISLAND:One windy grey ferry trip later, one gale on arrival. Meet Chris the Brit in a totally deserted common room...kind of like the island itself. Shoot the breeze and go for dinner down at a windy and dark seaside which is probably jammed in summer...NOT TONIGHT. And then, George. George loved us but especially Chris, who knew the difference between Tsipouro and Reki (greek liquor) and got invited to a family's restaurant after pulling his motorbike over to see them brewing and cooking meat which made him really interesting to George. One massive meal (lots of cheese) with free Reki and dessert later, we waddle home.
Lessons from Traveller Chris, who just got on his motorbike in London a month ago and just headed east:

- Ask service personnel their name if you're having a big meal, or if you think you'll be back, like at a bakery. Or just anyone really. Everything just works better after that. See free booze and dessert above.

- Don't book more than one location ahead - ‘anything more is like a straitjacket’. No regrets about my ‘plan all the things’ approach but might try his thing in Asia. Livin on the edge oooo yeah.

Spend the next few days on a quad bike, one day doing bugger-all. Naxos is a wild old place in its interior. Drive like a grandad initially, but get it. Mountains, cloud, scrub, villages, vineyards, tiny churches everywhere (on the top of mountains of course) gruff-looking farmers (giv’em a wave though). Resist the old lady in Minos who drags me to her house to sell me weaving products...climb.

Quiet as hell and so-so weather. Good chillout time though. Learned some things, ate some things, certainly not time wasted.