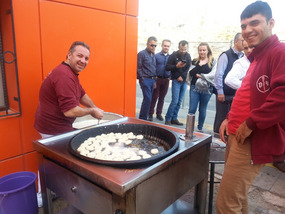 Turkish 'Lukman'? dudes giving it out for free.
description
. Decided to see somewhere not Istanbul and not Cappodacia (pricey, far, cold). A pleasant seaside ‘town’ (3-4 million) close to the ruins of Ephesus and other destinations, it is. Path to my hippy-dippy hostel kinda crummy but that's parts of Turkey for you. Also populated by cats, dogs and the odd prostitute. Shantihome Hostel is run by a bunch of Hare Krishnas and cleaned by a muslim lady, all who enjoy many smokes and the odd beer or spirit (reki)...Ulgar, Mustafa and Vili all mild mannered and chill as anything - ‘pay later’ and don't wear shoes inside. Damned good cooked breakfasts too.

Met Emmanuel - the French Canadian death metal DJ on a visa-enforced break from Norway - who I know from Istanbul, when he got in later. Go to Ephesus together, why not? Always good to share the ‘travel screw up risk’ but do it easy. As usual it takes a bit of imagination at these ruins, but due to its size is still worth seeing. Don't know how some of it hasn't fallen over (like the Library of Celsus) but gives a good idea of how grand the place really was 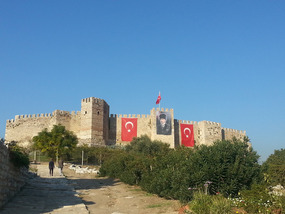 Selcuk fortress/flag depository
. Manage to find a 2 lira bus back to Selcuk where we check out the Basilica of St John (wrote his Gospel there or something) and a big fortress of some kind. Back to the hostel, get beers.

Other Izmir sights:
-Some sights pointed out to me by the kindly Ozman, a down on his luck shoeshine and guy and ex-con (shot a bad man in Istanbul) who's half decent English and less-than-slick demeanor convinced me to let him show me around. Quotes:
-upon me pointing out a Burger King: “you like black people?”“sure?”“Soul Brother Number One”
-”we are one and one”-
“we live then we always die”...still guilted me into paying him ~$7 at the end but not the worst.
Other Entries
-