Not even scratching the surface

-
Istanbul. Didn't even get close to scratching the surface - 14 million people part of the old cliché about the city ‘half asian, half european’ but a cliché because it's probably *about*. Minarets/mosques and, the sodding 6-30am call to prayer male it 'asian' but otherwise the, vinyl record stores, american baseball hats, nightclubs, wine bars etc made it just seem like another 'western' city. Neighbourhood around Galata Tower in Beyoglu is fairly busy...more so when headed up the hill towards famous (in a 'lots of antI-govt demonstrations' way) Taksim Square where prett-y much everything is.
Day 1 - classic sights of the Blue Mosque; Hagia Sophia 'church, then mosque, then museum'; underground cistern 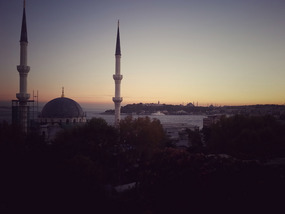 whole lotta mosques at dusk
. All fine things but have seen a lot of fine religious stuff on this trip, just different styles this time. Went with Ebeid to find a tour but ah they don't run them anymore so we wing the above. Tell him aaallll about Gallipoli at some restaurant ‘Pudding House’ that touches on it a little - it used to serve as messageboard for ‘the hippy trail’ or something, people offering/needing rides to Afghanistan and the like. Rest up, find an Irish pub and settle in for a World Cup final. Most intense AND exciting game I've seen, probably due to roughly equal numbers of aussies/kiwis making a hell of a noise when their team is up. Win 34-17 (would've been 40 if Ben Smith wasn't a moron) and celebrate with some Kiwis on their way to the airport from the pub. Come home and leave again for a couple drinks with Ebeid and Cole at some hipster beer/whiskey place. Good day. Though oddly was barred from going into a pub(?) With music because ‘no europeans tonight’ and ‘one person at table for four not good’...should've been heading home anyway but ‘what the hell?’ 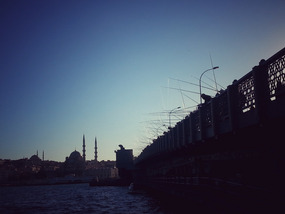 Late afternoon fishing
.
2- muck around trying to fix lousy redirect bug on my/everyone's internet devices, fail fail. Walk a while to Istanbul Military Museum. Closed, open on Thursday (it was Sunday). Screw them, one attempted shoe shine scam on the way back and the weather is cold windy and gloomy. Only thing for it is a pile of quality baklava.
3 - worst organised group expedition yet. Next time I'm putting my boss pants on. Too much semi-confident mucking around with destinations and ways to get to them, very little seen beyond a couple of old/new mosques. Get a late lunch and at least a cruise up the bosphorus river - mosques, flash houses, palaces and another great sunset.
4 - archaeology museum in lieu of Topkapi Palace was a snooze and then was trapped inside the compound waiting for some large and expensive looking government convoy went through. Exciting. Went up Galata Tower, caught some views and then went wandering up into a hillside park populated by drinkers (tea and other stuff) , dogwalkers and a couple of homeless guys running a duck farm or something? Great sunset views at least 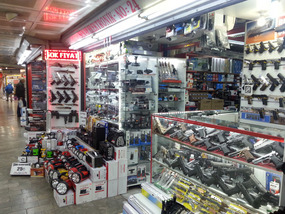 'murica...I mean Istanbul
.
Social pages: A few coffees and meals with hostel people which is fun enough but not going to linger in the memory much.
No epiphanies but at least Daniel the Italian has been to Vietnam before which could be useful? meh.
Scams/pseudo scams:Guys approaching me twice in 10 minutes on my first night wandering around Beyoglu because they're ‘also from out of town’ and would I like to go for a drink with them. At best a large bar bill from them and friends, worst a robbery and beating. Classic ‘oh you're not Turkish’? Do I remotely look Turkish? Bastards. Emmanuel a tall death metal dude had some guys actually pull up in their car and ask if he wanted to go for a ride and find some bars.Shoe shine guy ‘dropping’ his brush. I point it out but resist his urge not to ‘break his heart’ and have my shoes cleaned. Update: twice in one minute on the way back home just before going up the hill from the bridge. Ignore.