-
Middle aged guy at Jaipur aiport baggage pickup gets talking to me and next thing he's inviting me to his car outside to go see the sights, diwali and get some beers? Super tired but also suspicious as hell from Turkey. Disingenuously take down his number...other guys including Brad had pretty good experiences this way it turns out but what can you do.
First Indian city and basically as busy, dirty and loud as I'd heard, so the shock is relatively low I suppose 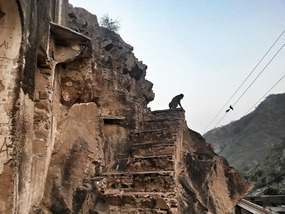 Monkey Temple Monkey ponders his next move
. Getting in after the travel I'd done basically meant I was less than keen to go out for a bit of dust and noise, however. Really it was a bit intimidating, went out for a ‘stroll’ which means watching your feet for poo and huge chunks of pavement ripped out of the ground, all while navigating what appears to be a lot of tiny shops and hectic roads full of anything and everything with wheels and hey some people too. Not a stroll, also no I don't want a tuktuk arrrgh time to go back to the hostel. Didn't do much but had some fitful sleep in the lobby common room until the room was ready. Made it to the Monkey Temple with Simon the pom...basically a bunch of buildings (temples I guess) and a whole lotta unruly monkeys...Joe saw one get thrown off a roof...it wasn't moving after. Also some guys were stopping cars from getting up the hill road by stretching a rope across the road til they got their 10 rupees. Ok then. We get Pizza Hut because it's night 2 of Diwali and not much appears open and we're lazy 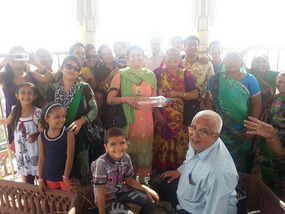 Indian Family invasion at the Iswar Mandir to
.
So Diwali in Jaipur means random explosions, day or night...maybe some visible fireworks in the sky...mostly not. And lit up buildings...some anyway. Not what I expected but then again some sort of orderly show being scheduled seems spectacularly unlikely too.
Visit a couple of giant forts outside the city and get my first taste of celebrity. Lotsa photos with me and Joakim the 6’6 Sweden-ian...not so much Sander the average sized blonde dutchman so there's a clue. Apart from forts we have an old city with gates, a tower (tower where a giant family of indians joined us) an ancient Observatory (which we were too tight to see) and a giant facade (the Hawar Mahal / palace of the wind). And a whole lot of shops for tourists to buy Ali Baba pants and the like. Shopping with the guys was interesting in that shopkeepers would show us the celebrities (cricketers, actors) who came in, also I was the third tallest after Joe and Dave the 7ft American. Yes.
Missed out on a trip to the THOUSAND SEAT Raj Mandir Cinema due to a bit of indecision from traveling mates but that's the sort of thing that happens when not flying solo all the time so tough cookies?
Caught Ashish on one night after a grueling day with some rich clients (nice commission from those paintings they bought though), great to see a familiar face...and for other guys to get more than a few tourist tips.

LOW POINT: thinking we were amazing for jamming four of us into the back seat of a tuktuk...Ashish doesn't even blink when we tell him because of course Indians can jam in oh about eight!?
WEIRD STUFF:
Other Entries
-