Show me the camels

-
A few days in hippy-dippy Pushkar, basically to see its famous Camel Fair, though I probably would've been happy to be somewhere far smaller than the other parts of India really. Whatever. Joe and I get in from Ajmer and splash out 4 bucks each on a taxi. ‘government’ toll station into Pushkar wants 20 rupees which I'd pay because ah it's almost nothing, but Joe isn't having any of it and tells the taxi driver we aren't paying jack. We get through, taxi possibly tries to take Joe to the wrong hotel, but eventually a local hotelier rings up our guys and arranges scooter pickups as cars can't go into Pushkar’s tiny streets. Joe's place is much cheaper and crummier so dinner on my rooftop! With rooftop tortoises! Go for a walk to the lake to see what all, the noise is. Get there and noise gone, right, but meet two Israeli girls and go to famous (?) Sunset Cafe by the lake for tea (forget booze, this town is a Hindu pilgrimage site like Mecca to Muslims), and to see a guy they ran into who was taking drumming lessons or something? End up at some guy called Omar’s birthday party down the road, never have I seen so many dreadlocks, , Israelis and marijuana all together in the one room. A few drums, wedding invites and funny Indian dancing later, I walk through some dark alleys and packs of dogs to my hotel, there's a guy just sitting on the doorstep waiting for people (me?), beats banging on the window as the owner said to do, yikes.
Plan: visit only Brahma temple in the world, lunch, camel fair, views 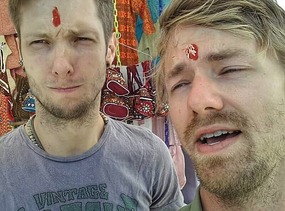 Pushkar passports...only cost $$$
.
Meet someone from Canberra first, knows a Professor we work with. Right. When you really only intend to take a few photos of the temple but you get whisked inside for a tour by someone who works there, things are pretty good...even let us take some photos which is not normally allowed but why not. Super busy, and before you know it we're asking for blessings from idols and all that fun stuff, then get dictated to by a holy man who gives us lots of flowers to chuck in the holy lake ghats (ponds?) and a spiel about how Indians give thousands of rupees ìn donations and so should we...euros, pounds or dollars are especially good, ha! Give him a few hundy but nothing left for our guide who turns out to want money too. Stiff kumara, should have told us before. Weird experience but not gonna get it anywhere else!
Camel fair starts tomorrow, so um, damn? Websites and people really all giving different answers on that so I guess I rolled the dice and lost. Plenty of preparations and THREE ferris wheels yes, some camels, lotsa horses. Some girls in their late teens a bit pushy about getting photos taken and paid for it but they can stuff off. A few thalis for lunch (joe got the spicier one, ha!), rest up, go for a walk through town up to the Papmochani Mata viewpoint,through a few goats, then it's us and a few other tourists. Hear a kiwi guy telling someone about the moa and Haast’s Eagle while we wait for sunset, top stuff. Find a random dinner spot, then go see newly arrived Sander and another dutch guy. Room hookup the three of them got in Jaipur turns out to be one room for three rather than three rooms, no one's pleased but still able to have laugh about the absurdity of it, ahh backpackers. Other Dutch guy has been traveling for SIXTEEN months. Nah, thanks. Off to romantic Udaipur.
Other Entries
- 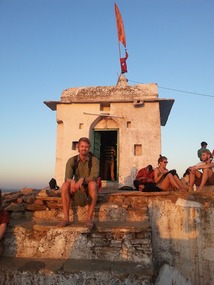