-
Udaipur for a few days - check in to my guest house seemingly run by teenagers (?), request somewhere to eat after the train ride from Pushkar, kid taking me to their restaurant partner offers me hashish. Guy running the restaurant ALSO offers me hashish, those french tourists i can hear all over the place must love the stuff.
Had to get through the usual stuff on the way from the train station, but seeing lake pichola was actually a bit of a relief 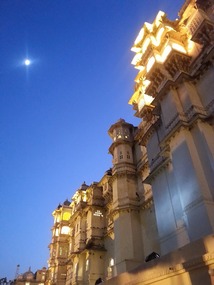 City Palace at night
...nice to see a large piece of space without anyone taking up space maybe? Udaipur’s reputation is something like the ‘Venice of the east’ but it's like calling Wellington the NZ version of Melbourne...a stretch but maybe you can see it...in this case if you try REALLY hard to associate the lakeside buildings with Venice then hey maybe.
Obtained an actual souvenir in the form of a Ganesha bracelet (basically god of awesomeness and success) bracelet from Shashi, cooking class teacher. Remarkable story about being widowed many years ago and being forbidden to work in a number of professions due to her high (Brahmin) caste, so had to wash tourists’ clothes in secret to make ends meet. Spoke no English when an Irish guy who ate her food suggested she start teaching cooking. Took the plunge and learned the language while teaching! Basically doesn't make much outside the 4 month tourist season either so not all roses. Fun class, just got to hold my notes until I get back.
Meandered around the City Palace complex, all very grand, but the best part was the performance at the Bhagore ki haveli (havelis are usually big old houses, in this case a museum) show named ‘Dharohar’. Hard to describe, but a ‘cultural performance’ of Rajasthani music mostly centering around a troupe of women who play bells attached to their arms and legs (sometimes with something afire on their heads?); also featuring a ‘fight’ with a demon and an MC who seemed to relish every word he spoke. Lots of Indian tourists there too, many of whom were speaking English to each other - why i’m not sure but maybe they only spoke their regional dialect and not Hindi? Note to self ask Ashish.