-
Arrive in Siem Reap from Delhi via Bangkok in the early evening. Resolve to do nothing and just relax if possible. Definitely very possible - next morning went to find breakfast (for a buck oh sweet) and was almost impossibly relaxed at the lack of traffic, clear skies and few people, of whom none were staring at me, that I could see. In hindsight probably too relaxed and lucky I didn't get run over while seemingly gliding across seemingly deserted roads. Managed to mostly do nothing the next day except get on a quad bike around countryside full of rice paddies, coconut palms and a few villages. Good fun apart from when it hosed down at the end so couldn’t get out the camera to take a photo of kids riding a water buffalo home. DAMN IT.
Come for the temples 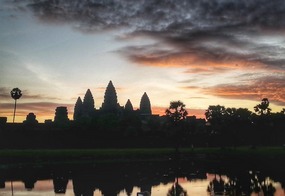 Le famous Angkor Wat sunrise
...stay for the temples...and then more temples...went on a tuk-tuk the ‘mini tour’ of Angkor Wat, Bayon, Terrace of the Leper King, Ta Prohm ‘the Tomb Raider temple’ (large trees growing in the ruins) and some other one that wasn't interesting at all. A mere 7-8 hours from my 5am wake-up for Angkor sunrise with the rest of the horde. Beautiful sunrise with the silhouette of the famous temple...sunset might be better...whatever not going back for more. Getting ‘templed out’ happens to everyone and hit me about midday. Some unique sights, but all done - later in Battambang met English Zoe who decided to do three days of temples quite happily. Whatever. It’s hot. Nap time.
Bike tour round around the fringes of Siem Reap is educational and all but jeez it was hot, sweated a few buckets in between seeing a few farms (ducks, crops, crocodiles - kinda crap), countryside and temples and had the best cold coconut drink at the end. Guide explained to us the massive quantities of money they need to marry in Cambodia - a poor family still needs to cough up US$2000+ for a dowry if they have a boy 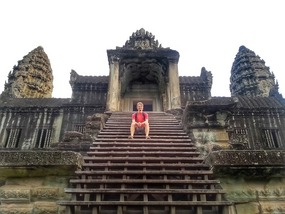 Angkor Wat's steps
. Doubles if you’re middle class, but at least the girl’s family uses the money to pay for the wedding. Done - lunch, and a nap.

Go out with roommate ‘Ji’ (american-korean-argentine, yes) for a bite, well some cocktails and a bite, well some cocktails, a bit, then some cocktails (caipahrinas) and a few games of pool against some Danes volunteering at a village building water filters. Spend the next day zip lining in the trees - naturally í’m neither thrilled nor scared, but a fun time being in and above the trees AND after we descended we saw the three gibbons that live in the Angkor Archaeological Park - they basically just came over to us, which was amazing, but when they got closer that was the cue for our guide to say the male might be coming to piss on us so time to get walking back to the start, around the odd tarantula hole, banana spider and termite nest.
Great little place, the tuk tuk drivers are at least as keen for work as the Indian ones but they're funny about it at least (think one putting his hands up and yelling TUK-TUUUUUUUUUK' with a big smile. Plus they offer you drugs if that's your thing? Other than that just walking around parts of Siem Reap at night that have some very clingy potential masseuses, nice place, though it basically exists for tourists much as somewhere like Venice does, though without anywhere near those same crowds.