-
Battambang, four hours down the road from Siem Reap - mainly here because I don’t want to take a 10 hour bus to Phnom Penh, but also because good old Lonely Planet reckons everyone loves it’ for its’ charm, slower pace of life, art district, colonial architecture etc. Meet the smiling German Katja on the way there - doesn’t book ahead because that’s how she rolls (I STILL DON’T UNDERSTAND THIS) and gets through the tuk tuk driver scrum with me to my hostel, which is meant to be pretty decent. Arranged to meet up next day to check out the ‘big’ Battambang attractions of the Bamboo Railway, and a giant batcave that a horde of bats (six million, or something) leave every evening, plus misc other things. Run into Katja in town anyway, grab a bite at one of the many ‘socially responsible’ restaurants/shops that dot some Cambodian towns. Katja was some sort of marketing supremo for BIC in Germany, did a lot of South American work and so spending several months there after SE Asia. Is doing a SCUBA course in Thailand. Interesting idea.
So the Bamboo train is some sort of hangover from the Khmer Rouge - they destroyed the trains and mined the roads, railways and rivers out of Cambodia to stop people leaving, and when they were booted out, at least in theory people could use rail again, except not really any trains 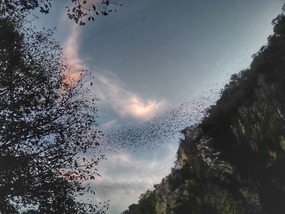 6 million bats leave this cave, every night!
. So a French guy (no shortage of them here) invented these little bamboo carts that could run along the railways. People would power it with bamboo poles, like a gondola. Later, motors. Hardcore 1980s backpackers would use these to get to other cities, occasionally. Rode it for a bit under an hour with Katja, well it’s nice to shoot through the countryside in a straight line for a bit, the ‘village’ selling stuff at the end sucked except for the impressive kids who could cut a deal for bracelets in English, French, Spanish and German (‘zwein fer ein dollar’ - ‘’two for a dollar, later four)? Our tuk tuk driver takes us to the statue of ‘Grandfather Stick’ (a guy who fought the Thais with an amazing returning spear) while giving us a history lesson including the words ‘some of my customers are intelligent’ i.e. not us, though don’t think he was being mean about not knowing some historical fact. God-it’s-hot-chillout time, then over to the mountains to see The Killing Cave (Khmer Rouge atrocity site, though turns out it went much deeper than Katja and I could see, but hey saw a pile of bones…) and take a really sweaty walk up to the top of the mountain to get a view of 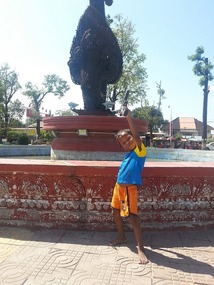 In front of a peace memorial...made of guns
...fields and things...but at least there were monkeys. The bats are a little bit late (inconsiderate) but hell of a sight - apparently there are six million of them in the cave. Going quickly out to a rice field, you can see them stretching for kilometres, looking like some sort of worm in the air? Dinner with Katja at another responsible place that actually serves a LOT of food, so much for going to the chocolate place afterwards. Pretty solidly decided to do a Scuba course for sure now.
Woke up one day thinking the bar downstairs had gone a bit far what with techno music at 5am and all. Realise later that these are the women down the road doing their morning aerobics. Still annoying but a little bit funny at least. Love the bar area, ‘hang out’ and talk to whoever, including the middle-aged Canadian Hare Krishna dude who just sat there riffing on everything that came to mind - karma is a wheel, trying to get this friends to come to India with him, border police everywhere Americans and their guns, his criminal convictions (for what I don’t remember), all sorts - try and get a word in to look interested every now and then but basically leave him to it.
Having passed or run into roommate Zoe about six times to converse about everything Battambang, decide to go along with her to the ‘behind the scenes’ of the Phare circus - basically a troupe that provides free training for street kids, orphans etc to do performance/circus work. Invented in Battambang but biggest in Siem Reap 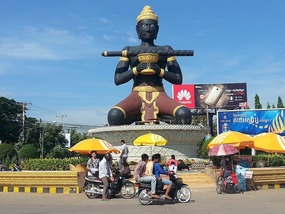 Grandfather Stick (basically a spear-wieldin hero)
. So, it doesn’t run on Saturdays, so agree with Zoe to cruise around town for the morning which works out well - she sees the stuff my tuktuk drivers showed me, I see some arty stuff including the really, really friendly artist Marine who knew Zoe from the day before - is recovering from DHENGUE FEVER but was happy to give us tea and chocolate to chat about her work (one major project is connecting kids worldwide through art in order to encourage empathy? Ambitious). She used to live in Australia (a citizen), even knows a bit about Canberra. What.
Back from art-ing time for our ‘free’ (well y’know) cycle tour with a couple of students, one doing English Lit, one doing Banking - they want to start a proper tourism business when they’ve graduated, so probably not a bad start doing this biking thing. He thought we wanted change when one of us gave $10 at the end of the trip...no, and I still had to give MY $10. Yes some of them are pretty damned poor. More of a food tour through a bunch of villages, seeing how they make rice wine (not that strong unless you’re Zoe), dried banana (ripping good snack, ahh lots of flies around though), rice paper (got to pretend to crush some, even more impressive when some chooks came to sit with me?) and some other stuff (i’ll remember later) but not sticky rice cooking bamboo, dang vendors had run out. Attempted many photos of kids yelling ‘hello!’ at us but couldn’t make it work from a bike. Pretty damned hot so many many drinks of water.
‘Phare’ Circus performance later that night. Ripping good time with the performers acting out something to do with an unpopular villager trying to endear himself to them? Ah whatever. While it sort of felt like a male strip show at times (topless burly smiling sweaty guys running around for most of it) they know their stuff. Ripping good music too. Nothing more elaborate than bamboo poles and some balancing acts and dancing but really well done. Could just hang here for days, but onwards to Phnom Penh. 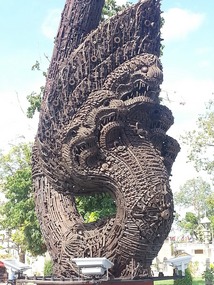