-
Rode with Zoe to Phnom Penh, the ‘super busy’ place that no one really seems to like. Ok sort of drive in the mini-bus except for the roads that got worse the closer we got to the capital?
Walking down to the river, get talking to a guy at the ferry operation and says tourists love the sunset boatride 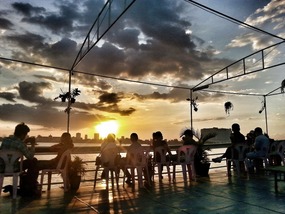 Sunset cruising with Cambodians
. Zoe in the same mind it turns out, so cruise around on a boat with really not that many people on it, sweet ride anyway cruising up the river to the Royal Palace (I’m pretty done with palaces thanks India, but it looked impressive) which made a good setting for my some of my usual ten thousand sunset photos. There’s a huge hotel in the middle of an island in the river which looks god-awful, and looms over the village of fishermen hunkered down below it.
Next day, Zoe and I to the Killings Fields and Tuol Seng Genocide Museum. Very merry. The Killing Fields is set at one of the major locations for mass graves (i.e. executions), just on the fringes of the city itself. It was not especially noticeable at the time (the mid-lates 70s) because once the Khmer Rouge gained power, the 3 million people living in PP were almost ALL moved to the countryside almost immediately, leaving a few bureaucrats and factory workers. On entering you’re greeted with a temple to the victims, with a large column of excavated bones filling the interior 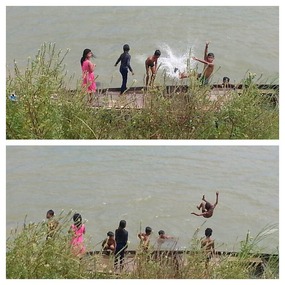 'HELLO!' And kamikaze acrobatics
. They’ve all been marked with the scientific categorisation of how they were killed - axe, hoc (agricultural tool?), hook knife, palm frond (they’re sharp) etc. The difference between the KR and Nazi genocides seems to be really just the level of technology - the KR made do, the Nazis taking a more índustralised approach to theirs. For both, if you ended up in some of these sites, that was the end of it for you. One of the trees in this location appeared to have been used mainly for battering babies to death - one principle of the KR was that if one family member was taken in, the rest had to be killed as well in order to prevent the possibility of taking revenge later on.
The genocide museum contained whatever was found upon the Vietnamese entering PP in 1979 when they invaded as retaliation for the KR attempting to take parts of Vietnam once they needed a new énemy’ to justify their existence. Naturally it was pretty grim, especially the photos of dead prisoners that were taken. Naturally no Cambodian life is worth more or less than a foreigners, but the audio of Kiwi Rob Hamill (the rower!) talking about the experience of his brother Rob - captured by the KR when he sailed into Cambodian waters on a round the world yachting trip - was very, very harrowing 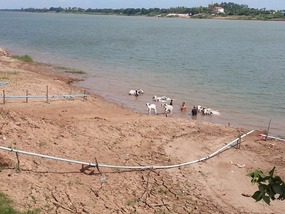 Being a cow not all hard work
. Once captured, you are guilty, because the Committee who give these sort of orders are NEVER wrong. Mark was tortured into ‘’confessing’ he was a CIA agent. What was so heartbreakingly admirable about his ‘confession’ was the bogus info he gave, naming his mother (by nickname) in perhaps the hope someone else would see his confession one day. He also gave the names of several celebrities who of course the KR knew nothing about.
If anything the Cambodian genocide was even more deranged than the Nazis (more thought needed probably) in that anyone could be guilty for any reason - soft hands, speaking another language, having glasses, having an education. All were indicators of corruption, and likely meant you were an enemy of the revolution. Which is why they thought kids were so great - they would take on these messages very easily. Horrific.