-
Get in to Cambodia’s beach capital mid-arvo after another 4 hours on a minibus, tuktuk drivers operating some sort of cartel where they charge you 5 bucks for about 5 minutes from the bus station. Hostel has a pool (for sitting around with your phone out it seems) but seems less enticing when you actually have air con in the dorm. Go to the dive shop and fill out a whole bunch of paperwork but not before agonising over whether I should use another operator because ah they have slightly better Tripadvisor reviews? Whatever. Go explore the apparently seedy Serendipity beach but see nothing apart from a moderately crowded beach without beggars and women demanding I become a customer, though a bar there with a giant ‘Let’s Get Wasted’ sign out front so it’s all possible.. Do the sunset photo thing, get Pumpkin Amok from another socially responsible restaurant, laugh at my roommate who got himself a colourful dreadlock, bedtime ahead of the 6am start / 2.5 hour boat ride.
Day 1 - arrive at the island of Koh Rong Samlouem, and sort of just ‘hang around’ until someone figures out which bed in the giant 15 bed dorm I'm staying in 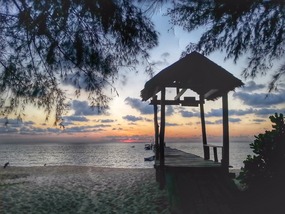 Koh Rong Samlouem sunset
description
. All very peaceful and beautiful, however downside is that day 1 is my classroom day of the dive course, so basically stuck inside (though well ventilated shall we say) watching educational videos and trying not to fall asleep. Pass it all anyway- some stuff surprisingly familiar considering I did the last course about 15 years ago at Auckland Grammar. Instructor Frank Klee is a ok-english speaking, obscenely experienced (stopped counting at 12,000 dives) and direct as zee germans sometimes are, but hey nice enough. All done mid-arvo as Frank has to get the 3:30 boat back to the mainland. Feel bad about him coming over just to babysit me but all part of the job I guess. Have a swim. Water 30 degrees, awesome. To the bar! Basically a little open bungalow where I can run a tab because if I leave without paying I won't get my dive certificate. Get re/acquainted with Irish and Germans from the boat, one of whom was Tina coming to the island to work in the bar/resto for a month in exchange for a free dive course, saves $380 so some idea of wages there 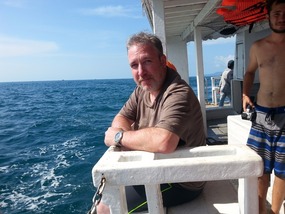 Diving buddy Mark the Scotsman
description
.
Next 3 days basically consist of diving in the warm warm seas while Frank took us through buoyancy, ‘what to do when’ (your mask falls off, you run out of air etc) drills and otherwise following him around as he takes photos of undersea critters. Not perfect but GOOD ENOUGH. When I wasn’t spending five hours a day learning, it was either a) reading, b) chatting at the bar c) drinking at the bar d) eating at the bar e) drinking and eating at the other restaurant up the beach f) swimming. Fun bunch to hang around with, including Mark (my dive course buddy) and his mate Darren, a couple of jovial Scottish engineers (based in Asia) who can’t stop taking the piss. Must remember the phrase “I run a tight ship, not a shite tip”. Also an Aussie at the bar who doesn’t know how to make any of the cocktails on the menu, but then again he’s also volunteering in exchange for a discount on his Advanced Dive course. Force him to make some G&Ts, not too bad in the end though he seemed a bit nervous every time which of course made it great fun watching and commentating 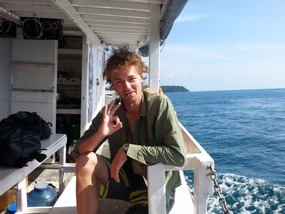 Presumably passed my course hurrah!
.
Do I want to stay on the island for some ‘fun dives’ now that I'm qualified, no thanks I’ll go back to the mainland for some aircon and a bit of shopping around for where to go for my next dive. That bit takes about 10 minutes, YES I WOULD like to go looking for whale sharks on an overnight dive! It’s sort of an exploration in the sense that it’s the first search around Koh Prins island of the season, so if they’re there then there will be more to come, but if they’re not then...wait some more. Get two level/floor/story boat with Sarah and Nata the Spaniards, and Bruno the Italian. Bruno constantly surprised and amused by my prodigious ability to speak a tiny bit of Italian from time to time. Also managed to inadvertently dance the flamenco when shuffling the feet on an unsteady boat, surprising and amusing the Spaniards. Double Win. The four daytime dives cover a decent variety of sealife with amazing 30m visibility - nudibranches, clownfish (many other fish), a bamboo sharks, eels (their open mouths always make them look like they’re waiting for you to get the joke they just told) or groupers that look like deadly stonefish. Pretty good, but slightly jealous of the over-the-top exuberance of Katja diving in Thailand. If given the option probably wouldn’t have picked a NIGHT DIVE but we were doing it so why not. Not as spooky as you think at least. Good fun on the whole but pity about the lack of whale sharks. Not surprisingly Nata and Sara are expert sleepers which is pretty handy for the six hour journey there and back from Sihanoukville. Finish up in Sihanoukville and have dinner with the girls, who are possibly the first lot of people not to be awed by my being in India because they’ve been there...a few times! What a gip.
On to Kampot!