-
Kampot is yet another example of me not really wanting to go on a long ride anywhere (from Sihanoukville to Phnom Penh in this case), so thought I’d hang around the river for a few days. So much so that my first day...what did I do on my first day...can’t really remember but a fair chunk of it was spent relaxing in my bungalow village by the river. Occasionally *in* the river which unsurprisingly was a hell of a lot colder than the 30 degree Gulf of Thailand. Actually got off my butt for a sunset river tour with some Belgians, and saw some fireflies at the end which we had to take a few minutes to decide whether they were fake or not because there seemed to be a bit of synchronisation of lighting. Of course they aren’t fake, that’d be a bit rich right? Right? Weird conversation. Belgians.
Basically spend the next day on a scooter until I do what what anyone who doesn’t know how to scoot does - hurt themselves 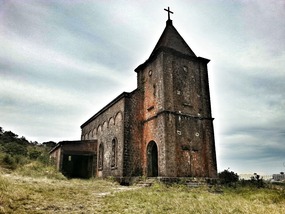 Spooky ol French church, Bokor Mountain
. Bit quick out of the sand = an ankle swollen up in about 30 seconds. Didn’t hurt to walk or else it would’ve been time for some good old Cambodian medical treatment. Basically the biggest attraction in Kampot outside of chilling by the river is Bokor Mountain, a resort built and abandoned by the French (temporarily joined by the King for a bit) a few decades ago. Check out some hotel ruins, see some temples and a wee bit of street-arty graffiti. A lot of people came to see if I was okay when I did my scooter wheelie and also managed to feel famous again when a family wanted my photo with them. Would be a bit of a spooky place (and a great photo opp) uo on the mountain with a bit of mist but a bit lacking, never mind.
Otherwise some of the best Italian food of my life from an Italian guy running a place called Ciao on the side of the road. His mother was even over for a while too so got to bust out some basic Italiano which is always fun. Met a couple of Kiwis there, got some cake...good times.
Minivan to Phnom Penh uneventfully - though with a guy trying to sleep off the last effects of food poisoning, just in every uncomfortable position possible in a small van. Didn't even leave the hostel that night, time to catch up on admin and make sure I'm ready for ‘nam.
Other Entries
-