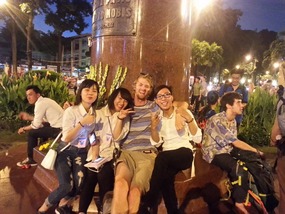 It's a hard life being...interesting to look at
description
. 10 million people and most if not all have one. Got to the hostel in District 4 (a non-backpacker type one), ‘gee it looks busy but I guess I’ll go for a walk’. Not the best idea at rush hour - it’s not that the footpaths merge with the road, junk and poo like in India, just that the scooters basically don’t give many gaps to step out onto the road on, nor do they stick just to the road. Try again when I’m actually hungry...go back and see the hostel then. Can’t find the vegetarian place the girls at the hostel found for me on the internet, so walk a pretty long way backpacker land, where for my first meal in Vietnam I go to...a Mexican place. Rice pancake with mushrooms anyway. And that attractive looking Vietnamese lady just convinced by a tourist to sit down with him is very probably a prostitute. Average sort of first night but at least the hostel’s great.
Went with Eric the German to the War Remnants Museum in the city. Here, the Vietnam War is of course referred to as ‘The American War’ 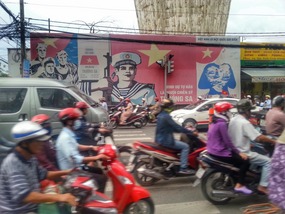 Scooters 'n' propoganda
description
...can’t argue with that. Apart from the trophy vehicles outside (tanks, planes, choppers, artillery etc) most of the rest is a number of photos, ironically (appropriately?) taken by American journalists who were covering the war. Everything was shown (thematically), perhaps most interesting being the locals shown looting American unexploded bombs to make...more bombs. They didn't waste much. Got kicked out at lunchtime...just because it was lunchtime? A bit like being in Italy again. Get some quality curry-in-a-coconut anyway so not time wasted. Significant part of the place is dedicated to Agent Orange and its effects - the US Supreme Court ruled on some basis that the US does not have to pay reparations for the effects on the Vietnamese, only on the thousands of its own veterans who suffered as a result. Pretty farcical.
Next day on a tour of Cu Chi tunnels, a network 120km long in South Vietnam, close to and sometimes under the city, as well as a massive US military base in the area. Clever as hell but life under there was pretty bleak - if the Americans didn’t get you with gas, grenades or water (and I suppose they mostly didn’t) the poisonous centipedes or malaria would 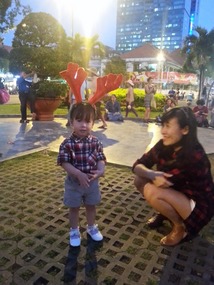 Nnaaaaw
. Some vicious looking booby traps, crawling around, an optional gun range (meh) and one awkward-but-not-unexpected-failure entering a vertical tunnel later, we were back on the bus and back to HCM. Had the opportunity to shoot a number of different rifles or machine guns but didn’t really appeal - pull a trigger bang bang, whoop dee doo. Couple of other people had the same reaction afterwards too.. REALLY LOUD THOUGH.
Might as well get amongst it so on to one of the city's many available scooter tours I.E. Sit on the back and let a tiny Vietnamese girl drive as part of a group of two Brazilians and Becca, an American Google worker (thought her name was ‘baka’ because uh, accent??). Went through Chinatown, got smoothies, streetside soup, go around Notre Dame, old Post Office (where there was a clock showing CANBERRA time) and just generally entertained and informed by the guides (my one named Sin). Ripping good time, didn't even feel like I was going to die amongst all the scooters. Caught up with the always-smiling Becca later for a few beers (actual proper beers at a craft-y not-very-vietnamese place) and dinner. Hanging with her, am convinced I am the funniest man alive but anyhoo good fun, catch you next time I’m in ‘frisco then. It was also the day before xmas so a LOT more Santa hats and reindeer horns around than you'd think. The French were here for a while but still? Also did a lot of photo-posing while waiting for Becca by the statue of Mary outside Notre Dame, good celebrity times again. Included was some students who were interviewing me as part of their homework. They just seemed so happy to meet me AND gave me some lollies later?!
Xmas was listening to hostel xmas tunes, going to Star Wars with Meghan, an American (it was super well done but a bit of a super rip off of A New Hope). Later on went for food with Meghan and later met up with her random mate Mike from Thailand, kind of New Yorker who says ‘yo’ a lot. Get a pedicure you say? God why, really, two dollars, ok. Whatever. Get some drinks in backpacker town and go home.
Off to Da Nang!