Do I go or not 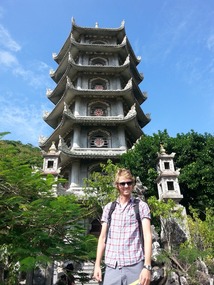 One more pagoda- Marble Mountain
...Da Nang gets mixed reviews from other backpackers as a ‘nice but boring’, but it has a beach and it’s been a few weeks since I had a dip, AND I have to fly there anyway to get to charm-your-pants-off Hoi An so why not. There aren’t millions of scooters so am I really in Vietnam? Hostel is run by again a bunch of youngies who while not related seem to have a great relationship with each other, and are very proud of their movie room ‘with all the movies’.
Hostel is by the beach so go for a walk in the grey twilight where there are a handful of people swimming AND saxophone music being piped through speakers! Why! Also the lifeguards are extra vigilant for tomfoolery and hijinks, using their whistle to stop people from - what was it - sitting on others’ shoulders in the water? Stupid.
Cruise out to a pizza place (it’s the only place nearby that I know has vegetarian stuff according to my life-saving Happy Cow app) down the road with USA Justin (doin’ a year away) and...Malaysian Sam who was great but says ‘eeeeee’ a lot in response to pretty much anything.
FOOD: Pretty damned good pizza. An Italian-Spanish couple run a place down the road which did okay pasta, still nothing as good as Kampot in Cambodia! Other place a Vietnamese spot in town which does vege stuff only of the ‘fake meat’ type in the Buddhist tradition of making meat-eaters feel more welcome when visiting. Pretty great soup, some noodle dish and the wrapped-in-leaf dough and spring rolls they also put in front of me for 5,000 a pop

In front of the draaaagon bridge
.
Otherwise two days in Da Nang spent visiting the Dragon Bridge with Justin and Sam (it ‘breathes’ fire on Saturday nights...all right I guess) strolling around town to find the Da Nang cathedral bedecked in Christmas stuff, also jammed with Vietnamese people for the English-language service of all things. A Cao Dai (some sort of buddhist sect?) temple is also down the road, distinguishing feature the giant all-seeing eye behind the alter. A sign reading van giao nhat ly (all religions have the same reason) hangs before the main altar along with illustrations of Jesus, Mohammed et al. Hired a scooter (insurance...don’t ask) and very carefully drove to ‘lady Buddha’ AKA ‘Bodhisattva of Mercy’ that overlooks the city albeit from a low angle. Strange to see a ‘lady’ version but a good photo spot along with the throngs of Vietnamese who are there for sunset as well. Many fishing boats leaving for the night as well.
Take the scooter to Marble Mountain the next day - not for the last time on this trip a woman comes up next to me while driving to strike up a conversation. Free parking at her shop, come in to the shop later yes? Ok whatever. And I did, haggling like a champ as well...or I felt like it. Hard work. Marble Mountain has some interesting views and climbing opportunities...unsurprisingly where the locals used to get all their marble, also ran into the French couple that I met in Ho Chi Minh while waiting for Becca! Small world. They had hitch hiked to Da Nang from Hoi An, apparently not too much trouble. Saw some caves, saw some views, later went to the beach, didn’t hurt myself on the scooter. Good enough.
Next: Hoi An.