-
Hoi An - it’s small but meant to be kind of charming. Tough one to miss, but not that many people have anything specific to say about what there is to do. But what the hell, at worst I get some cheap tailored suits? That’s pretty much it, famous for suits, lanterns, old two-storey buildings and cooking classes. Arrived at the ‘Tribee’ (like...Tribe?) hostel, did some research on suit-makers and found places with vege food. Yes. Sweet.
The tailor I found, Mr Xe (like ‘say’) was a serious looking guy who was chewing and twitching a bit as he did a bit of record keeping as I came in, though I was greeted by a cheery woman named ‘Lang’ (?) who helped with deciding on colours and, linings etc 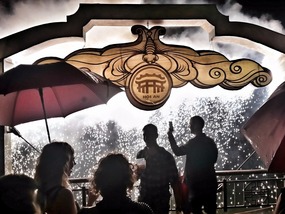 Slightly unexpected NY bridge fireworks
. Basically all went well over three visits in three days. First day Mr Xe says ‘When can you come in tomorrow?’ ‘Uh, morning I guess’ Mr Xe: ‘No! You come in 6PM!!!’. Ok why even ask. At the end of day 3, ‘when you leave tomorrow?’ ‘Uh about 10am, I have to get to Da Nang’, Xe: ‘You come in 10:30, I like you, you good customer, I give you free pants!’ ok whatever. Two suits, a blazer and four shirts later for US$300 - all tailored, pretty criminally cheap. Don’t really wear suits but whatever, should be good for years unless turning 30 is my cue for getting fat.
Otherwise spent the rest of the time checking the place out - canals, great places to eat (heaps of vege stuff), no cars OR scooters in large parts of the ‘old city’, old buildings, old ‘heritage’ buildings, lanterns and one cooking class. New Years was spent at a BBQ on the roof with the usual smattering of nationalities AND an actual Kiwi, first one since meeting those two in Kampot. The bubbly Achala from Wellington (even) who’s moving to Melbourne so, I guess, some half-useful advice given to her about Oz, well maybe 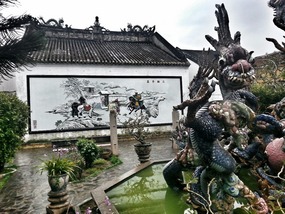 Fukian Assembly Hall
. Had some tofu, some gin, some beers and did a last minute dash to ‘the bridge’ across the river where we saw about four fireworks launched into the air BUT then half the bridge kind of exploded in sparks so that was interesting. Hung out at some bars, went back to the room where I was billeted with two other fairly young aussie girls who we did meet in town. Some dude came in for a snuggle with one, hmm that’s slightly loud snuggling and chat, ‘hey maybe shut up, hey she told you to get out, why don’t you get out, yeah no dramas mate, great stuff it’s 2:30am time to sleep before my cooking class’. Some laughs with the girls “worst roommates ever” but not really.
Nice spot unlike any other in Vietnam, but don’t need to go back. Unless I really want another suit measured.