-
Pronounced 'hway'. Writing this about 10 months after the fact as I noticed nothing in my online diary...so what'd I do? My photos seem to indicate I walked around an old imperial city and spent a bit of time dressing up as an emperor.

Let's play 'was it a scam': cycling on the roads of Hue on the way to the tomb of Tu Duc, an emperor who built basically a summer home around a lake that would be his tomb 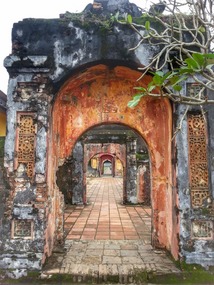 Palace gate in a gate in a...
. Woman on a scooter pulls up next to me and starts asking me where i'm from, etc etc. Invites me to leave my bike at her place and she can take me on her scooter. Why not?! Or why?! Anyway I did it, I think she gave me a bit of a bare bones history lesson but did let on after a bit of questioning that she'd like a donation for kids schooling at the end of it all once she got back to pick me up. She asked me inside her house so I could chat with one of her kids about his English lessons, see what sort of work he'd been doing. Story checked out, and they gave me some dragon fruit for the road which I didn't really rate but it was nice. I don't remember how much money this was, but what I gave her wasn't exorbitant or as much she wanted. All in all not a bad experience for day 1.

Day 2 was a stroll to the imperial city, which was interrupted by Louise, a very Irish-sounding Irish girl who was only too happy have a chat and walk around with someone else. Introduced new slang word 'savage' i.e. cool. Not too taken with it. Good fun and swore a goodly amount which was refreshing somehow. Also amusingly guilted me into paying to dress up (she really wanted to do it and made sure I knew I was getting old and stodgy for not wanting to do it). Not bad (but still tacky). Huge complex that was damaged by the French and then during the Vietnam war, but restored somewhat. Plenty of colour and a few mozzies.

Neat little family-run hostel. The bike they provided was kind of dodgy but what can you do.