-
Obviously I'd had enough of writing diaries if I've had to try writing an entry for Hanoi 10 months later?

I do remember being at some 'party hostel' in the Old Quarter which wasn't really much of that, and that my room mates were often asleep or not really around 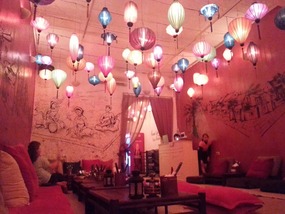 The Lantern Rooms restaurant
. Anyway, welcome to the end, reader (just me?).

In the end I missed Ha Long Bay, which I understand is crowded as hell but 'quite something'. But maybe that's what you get when you decide to wing it in a country...I chose to see a good chunk of Vietnam and ended up seeing a less-famous but ultra-huge system of caves which was a big chunk of time that would've otherwise been taken up with the Bay. Maybe I could've smashed a trip out there over a couple of days but I couldn't be bothered, which is probably what happens to a solo traveller at the end of six months. Hanoi might've been one place I didn't dip my toes into as much as others - I remember strolling around 'expensive' (2 bucks for a 'caphe'?) Vietnamese coffee shops with free wifi (including 'Cong Caphe' where they dress as the Viet Cong!?), a couple nights of American roots music at the Hanoi Social Club and some schmick meals for five bucks or so...I remember it being similar to Saigon / Ho Chi Minh City except the millions of scooters seemed to stay off the footpath for the most part 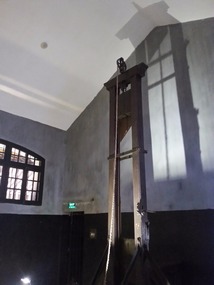 Hoa Lo Prison aka The Hanoi Hilton
. Found a Kiwi cafe called 'Puku' but wasn't much to it apart from a decent choc milkshake.

So what'd I actually do - there was Hoa Lo prison, where the French colonisers did a lot of dirty work (Madame Guillotine features in my photos) and where of course John McCain spent a fair bit of time being tortured - famously he was offered the chance to go home (as a token of the North's generosity) when it was revealed his father was a high-ranking military official - but he refused. To this day he can't fully raise his hands above his head as a result of his stay. I think the busload of American tourists' and I were moderately impressed with how it was all set up at any rate.

Was there a lot else? Probably some souvenir shopping, and definitely a few more entertaining chats with young locals down by the lake. One or two of are connected to me on Facebook, one of them being an articulate and sassy nine(?) year old which might be against the Facebook terms and conditions but what can you do. The adults were more interested in knowing where I was from and what I thought of Hanoi, but this kid was demanding to know why I was so tall and did I know DragonBall Z (somehow yes). Messages from him on Facebook are generally a 'hello what are you doing' with no follow up regardless of my message. Probably Mum doesn't bother to show my replies which is fine considering the limited nature of conversations with 9 nine year olds these days.

A fun, but busy, bunch, the Vietnamese. Nine months' later it all seems a bit unreal. Will I do it all again in 2020 or will all this mid-30s career-and-a-mortgage business stomp me in to the ground if I even think of it? Up to me, in the end.

P.S. after watching 'Up in the Air' for the second (?) time on this trip, met Kiwi Achala (from Hoi An earlier in Vietnam) in Bangkok airport (thanks Facebook 'Stephen is traveling to...' posts) where she chatted in her great Kiwi accent about...trying to find souvenirs and some kind of sticky rice I think!? Now a doctor in Melbourne hoping a minimal number of patients flash her, from memory of a Skype conversation a while back.