-
With my instigation, us three orphans complained to Ashraf about our accommodation. He offered to find us an alternate houseboat and to improve our rooms ie fly screens so that we can open windowed etc.
After breakfast we piled into 5 shikaras for a float around the lake 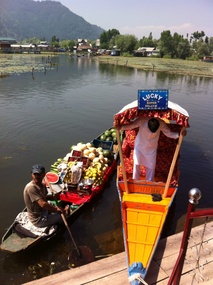 Shiksa ready for us
.
Shiksa rad a type of boats a bit like gondolas and are used for transport around the lake.

A beautiful day, though it got hot in the afternoon. Before lunch we stopped at the Heritage Mishal Gardens, built by the Moghuls.
We were the real curiosities there. The place was full of Indian tourists who all wanted photos taken with us. The park was full of happy children wading in the fountains. The boys either in their underpants or naked and the girls fully dressed.
Picnic lunch on the boats before continuing with the tour.
Friday for Muslims here is similar to Sunday for Christians. Constant praying, going to mosque and many commercial establishments closed. This Friday was extra special. ?????????
As we paddled past mosques there were hundreds of people on boats and on land dressed in their finery, some praying and others enjoying themselves.
We then a paddled back through canals lined with interesting buildings built on pylons on the lake bed. Only way in by boat.
It was a long hot day so on return we were happy to settle down to relax with a cold drink.
Sitting on the verandah we noticed black smoke on the opposite side of the canal. It looked like a house was on fire behind a houseboat. Ashraf and his brothers jumped into a shikara and rushed to help along with many others. It looked like panic, chaos and utter confusion. Some people were working on moving the houseboat, we could see flames which seemed to be spreading and eventually we could see a hose and some people throwing buckets of water over the fire. In the middle of all this th police boat arrived with sirens blazing an did nothing. Amazingly the fire was under control before it spread to the next house and then the fire brigade arrived.
Ashraf came back and reported that the fire was caused by a leaking gas cylinder in the kitchen between the houseboat and the house. They saved the houseboat by moving it. The only damage was to the kitchen building.
Other Entries
-