-
An early start to avoid the heat, but not early enough.
We visited the Shiva Shrine visible from the houseboats 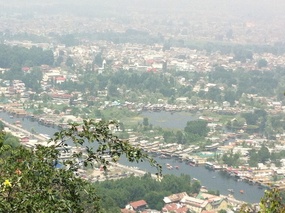 View from the Shiva Temple
. a scholars rode, then some people walked up the hill and others were driven to the top. I walked half way and then got on the bus.
A police checkpoint and Heavy security at the base. No phones or cameras allowed.
240 steps up to the little shrine perched on top. Inside a ????? was dispensing blessings while the supplicants moved around in a circle praying and giving gifts of money.
I got an orange dot on my forehead and some aniseed sugar chrysalis.
Then a long walk down the hill with three others.
I needed cash after yesterday's spending spree, so after lunch I went with Ashraf who had to do some shopping. Helen and Bridget came too. Ashraf said he'll meet us in an hour so we looked around the local shops and market. even more seedy than usual, but people were pleasant and kind to us. It was hot so we went into a few shops just to her away from the heat. Bridget even bought a coat.
When we finished we tried to wait for Ashraf back at the ATM as it was inside and there was a chair to wait for Ashraf. But we were not allowed to stay there.
The young security guard took us to an empty shop next door, conjured up a couple of chairs and a fan for us. Being a security guard was a part time job for him, he ideas studying to be a hotel manager. He certainly had the right attitude.
Other Entries
-

I am following you all the way Eva, it is quite the journey indeed, cant wait to hear about it in more detail over a glass of wine in Wanaka. Your husband must be getting lonely by now ? keep safe sweetie xx