-
Well in the end four of us decided to brave the trip to leg, Ladakh.
Neither of the promises drivers materialised and we got a young man called Masood 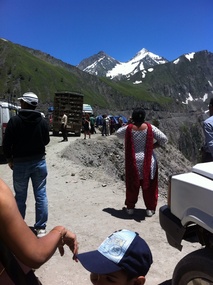 Waiting at roadworks
.
He is a bit young and brash and most of the time till our tea stop at Sonamarg he was on his mobile while dodging traffic. When we stopped for tea I asked him to turn his Mobile off for the difficult section between Sonamarg and Kargill. He was good and never pulled out his phone after that.
We then started on the much feared road, but in fact it wasn't that bad. Traffic was one way for the bad sections.
The mountains , valleys and colours were spectacular. It was worth the journey just for that.
Along the way there were villages, shepherds and lots of roadworks. They were doing a lot of work manually. Sad to see people working under those conditions when we know how different it is in our world.
I don't know what Masood had in mind for a lunch break, but eventually we had to insist that he stop next to a field so we could eat the packed lunch we got from Ashraf. Had a bit of trouble finding toilet stops on the way. Masood not very helpful on that score, so we all had to have a pee in the open field.
We arrived in Kargill late afternoon and checked in. Ashraf only booked us two rooms so I ended up sharing again. Hated it.
Went for a walk and Joe decided to try the local hairdresser. People were very friendly and it was fun watching.
Other Entries
-