-
We set of at 6:00am. Masood wanted us to leave at 5, but did not explain why, nor did Ashraf mention anything about it.
The morning light was beautiful and the scenery changed to arid and stark 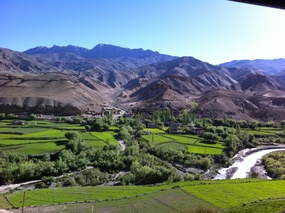 Beautiful green valley
. As spectacular as Grand Canyon, Bryce Canyon and Zion together.
We went over a number of passes the highest of which is Fotula at 13,479 Ft.

Along the way there were a number of checkpoints where we had to pay a toll and others were border controls where we had to fill in forms and present our passports. At a place called Khalsi after the formalities were completed the guard asked what our occupation was. When he heard that Helen was a dentist he insisted on showing her his teeth where he had some work done recently. Then he tried to talk us into sponsoring one of children's education to the tune of 15,000 rupees.

Parts of the road was really good and new with some washed away bad patches. However at one point we found the road closed because of a big landslide and had to take the old road. Single lane, very narrow and continuous hairpin bends. It must have been really challenging for Masood, but he handled it well.
We stopped to buy water and a cup of tea.
About 2 hours 30 left to get to Leh on easier roads. ETA 1 pm.
We arrived safely and found the hotel. Again Bridget and I were booked into a twin room, but I asked for another room an I'll pay do it.
We had lunch at the hotel and then went our various ways. Joe and Helen were feeling good and decided to hike up to Leh Palace, Bridget had a rest and I walked into the city centre for a wonder. Much more pleasant than Srinegar, the shopkeepers try to engage you, but are not pushy.
Other Entries
-