-
All but the four of us who just got back from Ladakh, left early before the curfew to go to Sonmarg for an overnight stay. The four of us simply couldn't face batting back into a car and do part of the journey we did just yesterday.
I tried to check my emails, but the modem was switched off 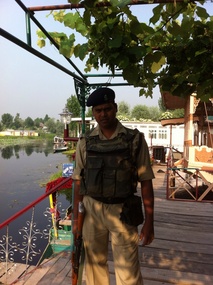 Ready for action
. I assumed because as Ashraf said that access to the Internet was blocked.

The same five uniforms, 2 police and 3 soldiers turned up about 7am and took their positions on the verandah.
They basically watched the river traffic and warned any passing shiksaras not to go past certain points. They also made sure we stayed put. It was so hot by noon that we would've want to go anywhere anyway.
In the morning the usual people dropped by, the flower man, the laundry man, the rubbish pickup and we had a friendly visit (no sales) from the jeweller.
After a while we started chatting to the soldiers. They were very friendly, but with limited English so conversation was limited.
They liked having their pictures taken and wanted photos with us and were very relaxed. As soon as they heard their motor boat approaching they would scramble to get their hats, guns and stood by the railing looking important and alert.
There is a heat wave and the temperature must have reached 40 degrees. Most unpleasant.
The day passed slowly, but we were relaxed and needed the rest. That is until Javed connected the modem again and we had access to the Internet. I checked my emails and then googled the PM visit to Kashmir. There ware news reports of two insurgent attacks on the Indian army. Two police and 8 soldiers killed in separate attacks. The militant group Hizbut Mujahideen claimed responsibility for both. We are now wondering whether the boys in khaki were here partly for our protection? Mind you they left at 9pm so no security after that, whatever they are here for.
Other Entries
-