Our Four Days on the Isle of Capri

-
Before boarding the ferry to Capri we bought an Italian SIM card from TIM. There are a number of carriers in Italy but the two TIM shops we went into ere very helpful. 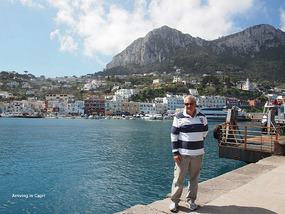 Arriving in Isle of Capri
.

The hydrofoil from Naples to Capri takes 40 min and is pretty spectacular. Unfortunately, not photos as you have to stay inside.

Arrival is at Marina Grande and the first impression you get is that the scenery looks a little like a Greek Island – white houses and rocky hillsides.

The actual town of Capri is about a 10 min taxi ride to a sort of a plateau in the middle of the island between two mountains. The centre of the town has no cars so you have to walk the last few 100 metres to your destination. We checked into the hotel Regina Christina (great place to stay at reasonable prices) and then walked around the streets. Rather than try to describe what we saw, check out the photos. Also near our hotel were the Augustine Gardens where some of the photos of the Faraglioni (the Great Rocks coming out of the sea) were taken. 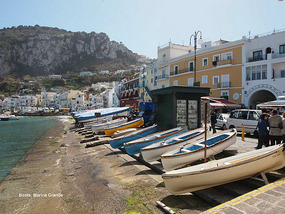 Boats Marina Grande
. In the centre of the restaurant is a 160 yr old olive tree. Great meal.

The next day we walked to Anacapri which is the old town situated right on top of the mountains. About a 45 min walk up some steep road and lots of stairs. Beautiful place with some good galleries and historic buildings. The highlights for us were the Casa Rosa, the Villa San Michele and Renze's chair lift ride to the highest point on the island.

Casa Rosa was built between 1876 and 1899 around an old fort. Fascinating house, very Moroccan in style. It houses a collection of 19 and 20th Century paintings of scenes from all over Capri.

We also walked from Anacapri to the Blue Grotto but did not go in – about an hour’s walk which luckily was downhill. Of course, we caught the bus back up the hill although this is an experience in itself – very narrow windy roads on the side of cliffs, with drivers who think they are in a Grand Prix 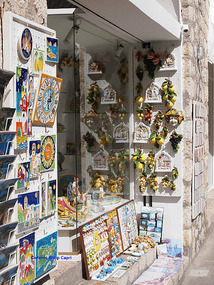 Back in Anacapri Sue chose to go through Villa San Michele. This was built by Swedish physician and writer, Axel Munthe. He is one of the many famous foreigners who contributed the history of Capri. He was a remarkable man in that he was appointed physician to the Court of Sweden but also spent a great part of his life in Capri. He gave free medical treatment to the locals and was one of the forerunners of animal rights. He developed incredible gardens around the Villa as well as a fine art collection which can be seen in the house.

Renze took the chair lift to the top of Mt Solaro which is 589 m above sea level and gives panoramic views of the whole island – again best seen through the photos.

Back in Capri, again we walked, we had a couple of great pizzas at a little family restaurant, Scialpopolo Trattoria after which we collapsed into bed.

Next day of course we had to climb more hills, steps and see more villas – this is Sue who is organizing all this.

First stop, Villa Jovis on the eastern end of the island. This was built by Tiberius and sits on a cliff 334 m above the sea. The villa was Tiberius’ palace and headquarters from which he ruled the Roman Empire in the last 10 yrs of his life, 27 to 37AD. It’s a huge place and was excavated between 1932 and 1935 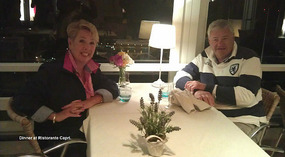 Dinner Capri
. Legend has it that Tiberius used to throw enemies off the cliff.

From a little park near the villa there are great views of the ocean. There is an amazing pink house, Villa Malaparte built on rocks right out into the ocean. This was built by in 1937 for an Italian Writer/Journalist, Curzio Malaparte. We have no idea how this was done but it must be one of the great houses of the World. We were told there are huge windows at the front and the back and when the house is approached from the sea you can see completely through the house to the cliff at the back.

From there we walked to the Villa Lysis built for Baron Jacques d'Adelswärd-Fersen, a French novelist and poet. This is a magnificent villa overlooking to Bay of Naples towards the mainland. Wonderfully designed and although the interior is still worth seeing, sadly the place is not well looked after and you wonder what it will be like in the future. 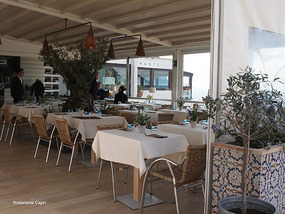 Where we had dinner night 1
. Actually, it was enjoyable as was the beer we had afterwards.

At the bottom of the photos are a few videos showing various locations on the island.

If you ever travel to Isle of Capri and are staying in Capri, don't take a taxi at 10-15 Euro, instead catch the funicular which costs about 2 Euro and takes about 4 min.

Other advise is make sure you have comfortable walking shows as that is the only way to really see the island.

So tomorrow we take the ferry to Sorrento and then travel to Positano.

Pictures are gorgeous. Thanks.
Best wishes, Rick and Lynda

Capri is lovely!!! The color, architecture, and cappuccinos are splendid.
Enjoy...Stacie & Roy : )

Wow... what a start to the trip! Capri looks sensational, but we are mostly envious of the weather! Haven't had a really sunny day since Vienna!