Our Trip Begins – Or Does It!!

-
What a way to start our adventure. 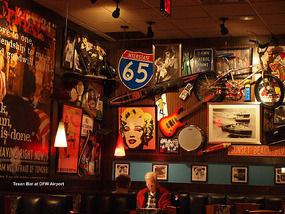 The Bar at DFW While Waiting for Our Plane
. Only problem was
we had to repack our bags as one was overweight. Flight was OK. The plane was
completely full and of course with typical AA minimal service but we got there
and as we had a 12 hr stopover booked into an airport hotel and at least rested
for a while.

At 3 pm we went back to the airport for our 5 pm flight,
checked in and went through security. Checked the departure board for the gate
but no flight to Madrid was listed. Eventually, we found out the flight was
delayed 3 hrs.

Went to the AA counter and explained that we had connections
in Madrid and Rome and after lots of discussion, someone told us they would
change the connections in the system so we would catch them. Gave us a nice
printout of the new connecting flights.

Arrived in Madrid, gain flying with AA and minimal service
although the crew were great, and waited for 3 hrs to fly to Rome. In Rome
after standing for 75min at the belt with other passengers from the same Iberia
flight, we all decided our luggage was not going to arrive 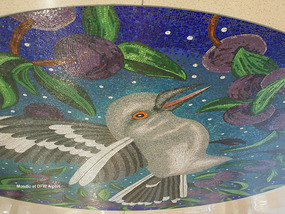 As this has happened to us previously we knew the drill, except in Rome all the
baggage is handled by different private contractors. Reported the bags were
missing to the right company, filled out the forms only to be told the
contractor could not check where the bags was and when it would arrive. So be
it – we could only hope!! Luckily Sue is very cautious and had packed lots of
essentials in our carry on.

We then went to the Alitalia counter to get our boarding
passes to Naples assuming the connection change by AA was OK. Of course, we
forgot this is Alatalia – as we non-shows for the original flight they had
cancelled our tickets and told us we would have to buy new tickets at the FULL
PRICE – 350 Euro each, that is $1,000 for 2 tickets for a 1 hr flight. They had
seats but would not give us a discount. After much discussion and waving of
arms, we decided they would prefer to fly with empty seats rather than get some
money for those available 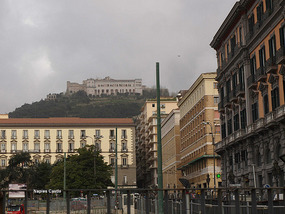 Naples
. The lad said they had to follow the rules which must
be a first for Italy.

No wonder Alitalia continues to be on the verge of
bankruptcy.

Instead of flying we caught the train from the station to
Rome Central and then the fast train to Naples, the whole trip taking less than
2 hrs and not expensive and arriving in the centre of the city. Considering
security, waiting for baggage and transport form the airport to a hotel it was
probably quicker than the plane.

We get to our Hotel only to find that there has been a
problem with our booking and as there was a Tourism Convention in Naples, they
had no vacancies. Now Naples in probably not the ideal place to bed down in the
streets so we eventually found a hotel, Hotel Orientele where the night
manager, to whom we are forever gratetful, did some shuffling and found us a
room. Remember this is now midnight.

A few pointers for the unwary:

If you have multiple connections always pack essentials in
your carryon

Don't rely on partner airlines to communicate with each
other, eg, AA and Iberia could not. And for non-partners just forget it.

If possible avoid Alitalia as they are totally
unsympathetic, terrible attitude and incredibly arrogant. They may not be
around too long anyway.

And finally, if it is possible, stay calm no matter how
frustrating it is, there is little else you can do as it is really out of your
control. If you can laugh that is even better.

So the first day was an experience but we knew it was going
to get much better.

WOW! Some adventure in travel ! You had your challenges for sure. Glad you made it with your talent of creativity and good humor. An adventure for sure!
Have fun! I will be following your fun from Maui !
Hugs Nancy

What a nightmare! But you handled it very well. Great advice but you must have a lot more patience than I. Hope all's well otherwise.
Cheers, Rick and Lynda

Ah, the romance of flying, the thrill of being a jetsetter. I'd forgotten !

Oh I am ROTF. I can see Sue with arms a flailing and Renze as cool as a cucumber but boiling inside. Sounds like you two have done this many times before. Good luck with the travels. We all miss you terribly. We look forward to the next set of photos and great travel details. Angels on your day.

sounds familiar and with traveling around Europe, my experience is that trains are so much more efficient and quicker (no security checks or wait times) and best of all their destinations take you to the centre of the next city , not some airport a mortgage worth of taxi fares away!!!! love and safe travels to you both....xxx

The start of your travels sounds dreadful but in seeing all the beautiful photos and reading your blog it appears those problems will fade quickly! We will be following your travels closely so keep the pictures coming. Have a lovely rest of your trip!

Despite all, you are having a great trip. We also had lost luggage in Italy, but fortunately it turned up (never explained) after two hours. Alitalia again. We agree that they are the pits. Thanks for the photos. You are getting the best out of Capri. Enjoy.