-
We caught the ferry from Capri to Sorrento and then had organized a car to bring us to Positano – not the most economical but certainly the most convenient. Ferries were not yet running and the bus is quite slow. 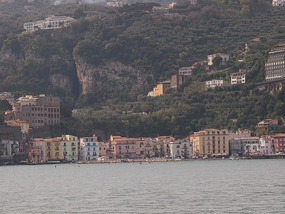 From Capri to Sorrento
. The town wanders down the hill to the beach. There are lots of shops and galleries art, fashions, ceramics, food and lots of lemon based things. The whole Amalfi Coast specializes in products based on lemons including Limoncello, candles, scents and perfumes.

We just wandered for a couple of hours taking in the sights and marveling at the houses built on the hillside, with their different styles and colours. It is a very visual place and much better appreciated through the photos rather than words. So enjoy the photos.

In the afternoon we caught the bus to our house. As with all these things you never know what to expect but when we saw it, we could not have been more excited halfway up the hillside overlooking the town and the coastline. We were introduced to the place by the two brothers who own it, Gianluca and Siduid, who are delightful. They can't do enough for us. You can get an idea from the couple of photos 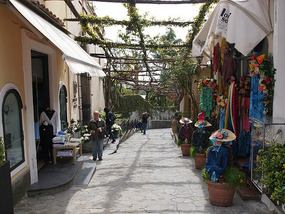 Walkway
. The house is marked in a number of them.We had planned to go to a local restaurant but were actually tired and decided to have a meal a home – even though it was cold how could we resist sitting on the terrace!! Our first home meal for a while.

These hills and stairs really get too you so we just crashed into bed – which we both deny had anything to do with the couple of glasses of nice Italian Vino Rosso.

The next day was a lazy morning and then more of the same, walking around this amazing place. You never get tired of the gazing. There are walks and staircases everywhere and when you have no idea where they lead, it is very interesting. Also it has an interesting effect on your legs – ouch!!! Great excuse for saying to yourself "I have exercised today so can have that cake or extra glass of wine" full well knowing this is only partly true

Ceramic Shop
. The locals are amazing as they do this all day everyday and lots of them smoke, probably most of them actually. Maybe they say something similar – an extra smoke as I have exercised!!!

The big news is that the luggage arrived so now we can put on something different.


We went to a local restaurant just up the street, Trattoria Grottino Azzurro. Good food and wine at reasonable prices but the entertainment is the thing. Mama, who is the original owner and must be in her eighties, sits in a corner and watched everything like a hawk and we think the staff were family members. One guy was hilarious. He served the food and never said a word
except when Mama or the other waiter said something to him where he promptly mumbled
something under his breathe and continue at the same pace unphased. But give credit where it is due, he worked his butt off.

We were going to space updates out but couldn’t resist sharing some of the sites of Positano with you..