The Coast, Amalfi and Further Afield

-
We decided to take a trip along the coast to Amalfi but as the ferry was not operating due to the rough sea, we had to go by bus. A day pass costs €7.60 which allows you to travel on the SIta bus, all day, along the coast from Sorrento to Solerno. The road is narrow and on the side of the cliffs overlooking the ocean, so a little scary but incredibly spectacular. The trip from Positano to Amalfi was about 45 min. Amalfi was the main town in this region about 1000 years ago. The centre of the town is St Andrew's Cathedral which overlooks the main square. The remains of the apostle, Andrew were brought here in 1206 and are buried in the crypt under the church.

Amalfi Waterfront
. It is actually quite touristy with lots of souvenir shops and certainly not the galleries or shops we expected to see. However, it is still worth a visit as the buildings and atmosphere within the town are interesting. One famous shop there is Andrea Pansa, started in 1830, which sells wonderful cakes and chocolates. We bought our morning tea there and had it on the balcony of the Cathedral – see photo.


After going through the Cathedral and wandering around the town, we had a light lunch at the Taverna degli Apostoli which is actually under the church. It was originally a jail. Family run, friendly, good food and we really enjoyed the décor.


In the afternoon we decided to catch the bus to Ravello which is a town in the hills above Amalfi. From the time we started to ascend into the hills, we were shrouded in fogs which by the time we got to Ravello, was quite thick 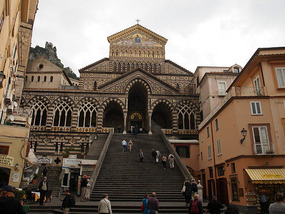 St Andrews
description
. It was also cold, cold, cold. The town is known for its scenery and culture with the Ravello Festival held there every year, see http://en.wikipedia.org/wiki/Ravello_Festival The festival runs from April to October with the highlight being the concerts is in the gardens of Villa Rufolo on a stage that looks as though it hangs over the cliff and is floating on the sea. This had not been set up yet when we visited s all we could do is photograph the gardens. We will be going back but will pick a day when the sun is shining.


The next day we found out the ferries were running and took the 10 am to Salerno. This is a spectacular trip of about 70 min along the coast, stopping at Amalfi and then going on to Salerno. To see the Amalfi coast from the sea is really the only way to appreciate its beauty with the towns and villages, Saracen forts and huge cliffs rising from the sea. We took photo after photo, a selection of which are shown here 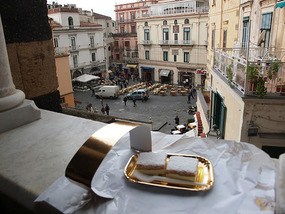 
Salerno is quite a large city of about 130,000 people. It is a commercial centre but recently has started to attract tourism due to its location being near Pompei and the Amalfi Coast. There is a train from Rome to Salerno and it is probably easier to access either Amalfi or Positano from Salerno by taking the ferry than from either Naples or Sorrento. There are some nice buildings and the city is very much into clothes. Of course, we has to have a bite to eat and Sue found a small restaurant place down a small alley, Malafemma Osteria. Family run, nice place, inexpensive.


We then took the ferry back to Positano – more scenery, more photos. 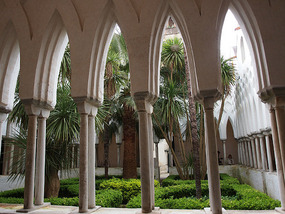 Cloisters, St Andrew's
. The plan was to walk up the road, take some photos of Positano from the road into the town, which is very high and then come home and relax for the rest of the day. Not to be, we found the road to Montepertuso, a village high above Positano. We thought we would walk a little way up the road and then return home. Well 4 kilometres uphill and about an hour and a bit later we arrived in Montepertuso. It was actually well worth the effort as not only are the views spectacular but the village hosts three of the best restaurants on the Amalfi Coast. We had lunch at Ritorante Il Ritrovo, by far the best food we have had since being away. The restaurant looks out over the sea and for those interested you can also do cooking classes there with the chef, Salvatore Barba and staff. We met some people in the restaurant who had done the class that morning and were enjoying what they had prepared.


Of course, having had lunch we had no choice but to walk home, much easier than going up. So although we had eaten well, we felt justified as we had also walked about 10 km during the day. It also meant we only had to have a really light evening dinner at home – couple of pieces of bruschetta.

Enjoy the photos including some at the end which show the
sort of things we do or see everyday.

One great in the whole area is they are really into recycling household garbage. There are five different types of material, different ones of which are collected daily - organics, paper, glass, plastics and aluminum and the rest.
Other Entries
- 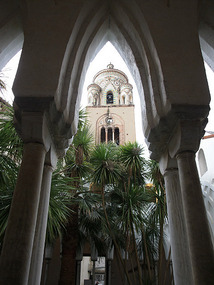 hope you are taking the zeebra home to paint eve