Deanna and More of the Amalfi Coast

-
Our very good friend from Sydney, Deanna arrived this week to stay with us a few days and to celebrate Sue's birthday. She had lived here for 4 months some years ago and was re-discovering the sights and sounds of Positano. Our first day together was spent wandering around, meeting old friends and Sue and Deanna going into every shop in Positano. This is not an exaggeration. In Positano, as in many other places, there are a number of the same shops in different locations selling the same items, but for some reason, women shoppers seem to think there is something better in the every shop. Men will never be allowed to understand this! After enduring this for some hours, walking suspiciously over the same area, looking extremely anxious and being observed by the cute local policewoman, Renze decided the best remedy was to cool off by having a swim. Sue actually joined him as Deanna continued to cruise the shops. So across the black beach, which is actually made of stones, we both enjoyed a refreshing swim in the Mediterranean Sea. 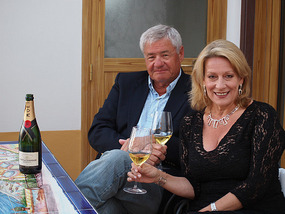 Celebrating Sue's Birthday
. After walking around the town for a while, it was back home for a lunch of anti-pasta and a celebratory gin and tonic on the balcony. Then a few hours rest and the celebrations really started.

The first twilight pre-dinner drinks were on the balcony at the villa after which we walked to the Le Sirenuse Hotel for dinner. We arrived before the restaurant was open so had no choice but to have another cocktail on the terrace overlooking the town. This hotel was the setting of the movie "Only You". With amazing views overlooking the coastline. The restaurant, La Sponda, where we had dinner, has 402 candles which are lit every night creating a wonderfully romantic atmosphere. The three of us had a fantastic night, wonderful food, great wine, highlighted by Sue being serenaded by the guitar and mandolin. We rolled down the hill and were glad to catch the local bus up to the villa rather than having to walk up the 400 step walkway. I know there are lots of photos of the celebrations but we did enjoy ourselves 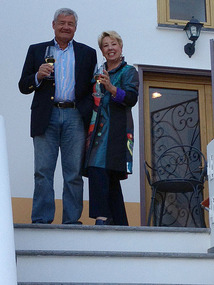 All this celebrating did have an effect next morning but Renze was informed a hangover was no excuse if there were more shops to see. So three hearty souls took the ferry to Salerno to visit Vietri sul Mare which is a small town a 15 min bus ride from Salerno and considered to be the home of ceramics along the Amalfi coast. The town is filled with ceramic shops and actually it gets a bit overwhelming after a while – too much choice. There is one large shop in a very distinctive building which has an enormous variety of things at reasonable prices. Well worth a visit.

We did buy something and have had it shipped to Maui. We are a bit nervous as to whether it will arrive safely so will leave it to your imagination what the piece is. If it does arrive in one piece we will post the photos.

Today of course we had to visit more shops – actually the same ones we visited two days ago. This time the girls actually bought something which probably says something about female processing!!! If they had bought the items earlier they would not have an excuse to see the shops again – very clever.

We then took the bus up to Nocelle which is a small village 400 meters above Positano. It takes about 40 min by local bus up the side of the hills on a very narrow road but well worth the trip just for the panorama views over the coastline. From Nocelle we walked to Montepertuso which took about 45 min and had lunch at Il Ritrovo where Sue and Renze had been a few days earlier and Deanna knew from her previous visit. The food is amazing based on local produce. Highly recommend the house wine as well. One nice touch was one of the locals was painting murals on the way inside the restaurant. He does this in his spare time. If you want to have dinner there they will pick you up and drop you home from Positano. Of course, having had dinner we had no choice but to walk the 4 km down the hill back to the villa in Positano. A great day.


In the next installment, will the girls find more shops, will they buy something? Who knows but stay tuned.
Other Entries
-

Happy birthday Sue. We can see that you and Renze celebrated in style. You look georgeous, colourful and happy. You chose a marvellous place to do it. Wish we were there!