Our Last Week on the Amalfi Coast 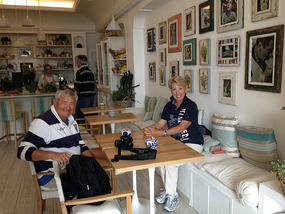 More Coffee
. We went to the marina only to be told the ferry had been cancelled because it was too rough. Now when we actually looked at the sea it was like glass but this is Italy so you "go with the flow". As we have learnt the word is "NORMALE" pronounced with the emphasis on the “E”. So we had to run up the road and hope at least the bus was running – we had already suffered the fate of one being cancelled a few days earlier when returning from Amalfi and then had to rush to the ferry – “NORMALE”.

The first part of the bus trip is spectacular – a narrow road on the cliff face high above the ocean. After about 30 min, the bus goes across a peninsula and comes to within 5 km of Sorrento but that would be too convenient so it detours to some of the local villages and takes another 30 min to get to the town centre.

Sorrento is a popular tourist destination of about 17,000 inhabitants. It is on the opposite side of the Gulf of Naples relative to Naples 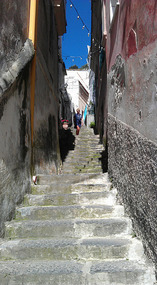 Stairs Positano
. And there are SHOPS. Actually the old town is very pretty with narrow pedestrian streets and some good quality merchandise at reasonable prices, especially leather and wood products. There are also lots of shops with stills at the back which produce their own brand of limoncello, which of course we sampled. I then separated from the girls for a few hours of peace leaving them to go into every shop. The trip back was interesting as the bus driver actually went the wrong way for a while and we were heading for Naples instead of the Amalfi coast. When he realized, a quick trip around the block got us back on track – “NORMALE”.

Sue and I decided we needed to go for a long walk so on Tuesday we walked from Positano to Nocelle. We had been there previously but by bus and then walked down. The walk up which goes through Montepertuso took about 75 min and then we walked another 20 min back to the La Tagliata restaurant halfway between Nocelle and Montepertuso, for more details, see http://www.latagliata.com/ We had read about the restaurant and we found it seriously good. There is no menu and you are offered what is available locally that day much of it grown in the garden right in front of you, all cooked by the family who run the place. We shared antipasti, followed by different pastas and I had a small serve of the local sausage. We were also offered their own wine which we found excellent. So for the food, a bottle of wine, a bottle of water and coffee each, we thought €50 was fantastic value – and the view is sensational as well

On the walk back we found a set of stairs that led to Positano which we took. Over a 1000 steps later we reached Positano and then had to walk up another 150 to our villa. Both of us were exhausted but very, very pleased with ourselves. We estimated we had walked and climbed for over 4 hrs in total.

Our last couple of days in Positano were very relaxed. We had planned to go on another “excursion” but instead just relaxed around the house, went for a swim and a few local walks.

Deanna had linked up with her niece, Cheryl and moved into a hotel just around the corner. We had the two of them for dinner one night which was fun. Also Friday night was the final night for all of us here, with Sue and I starting our journey to Northern Italy and Deanna and Cheryl going to Rome for a few days before heading home to Australia, so we all had dinner together at Café Positano one of the local restaurant.

What has been interesting during our stay here is how things have started to open up. Just about everything closes down from December to the beginning of March. Café Positano is a typical example as when we arrived it was completely closed up and then we saw them cleaning the furniture, painting the walls and planting flowers everywhere. It is now fully functioning as are all of the restaurants and hotels here. It's been really fascinating watching this occur all over the Amalfi coast. The place has bloomed and there are certainly more people arriving all the time.

Thanks for this Renze (& Sue), we will be in Sorrento on 15th May. Looking forward to catching up on 7th in Milano (need to organise where). Best wishes TP

AND the most talented Sue shows her wares. The picture is fantastic. AND Renze you do such a good job informing us all of your whereabouts and happenings. I am still jealous. Our timing seems to be right on. We are heading back to the Island on Tuesday as you two head North. It seems as though I might be traveling back to the mainland very soon as Dad will need more care soon. We miss you and getting back to the Island will be nice, but not so nice without you two. August will no come soon enough. Is there anything you would like me to do, or check on for you? If so, I'd be delighted. Angels on your day, I look forward to the next blog. Just wish I was with you.