-
We took a hire car from Positano to Naples Station, which although a bit extravagant, was by far the easiest thing to do, considering the luggage and the transport situation. The alternative is a bus or ferry to Sorrento and then a train to Naples. Our trip to Bologna was by The Frecciarossa, the fast train which reaches speeds of about 300 km per hr (about 220 mph). The 591 km trip which included stops in Rome and Florence took just 3 ½ hrs. These trains are very efficient, clean inside and of course there is no airport security and you arrive in the centre of town. Italian rail is about to launch their newest model, The Frecciarossa 1000 which is claims will have a top speed of about 500 km per hr. Train travel in Europe is just great. We walked and eventually found the hotel, Hotel Aemilia, but we should have taken a cab – everything looks so much closer on Google maps. Nice hotel in a good location.

Bologna is a city of about 400,000 people in Northern Italy – although greater Bologna is about 1 million 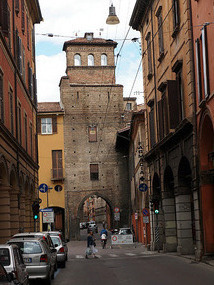 Bologna Tower
. It is a University town which claims to have the oldest existing university in Europe, founded in 1088. There are lots of students which means lots of bars, pizza restaurants and coffee shops. The old town is surrounded by what is a left of a wall dating back to the 12th century and is considered one of the best preserved walled cities in Europe. The old city has many historic buildings and is famous for its towers and porticos. At one time the city had about 200 towers of which about 20 remain.

The cover arched walkways, the porticos, are everywhere and you can practically walk the whole old town under these. Our first day was spent exploring the centre of the town, just walking around. It was Sunday so cars were excluded from many areas. Lots of activity around the main square, Piazza Maggiore, as well as some interesting people. Italians really like to dress up even when just going for a walk on a Sunday so it is quite funny to see women negotiating cobble stone streets in massive stiletto heels and 4 inch platform shoes – oh to be an ankle surgeon!!

There are a number of important churches in Bologna but the one that impressed us was Santo Stefano which is a complex of different churches, cloisters and courtyards. The complex contains a small chapel dedicated to Italian Airmen who have fought in wars and either lost their lives or have more recently passed away. The walls are covered with photos of these men many of which were only in their early 20's when they died 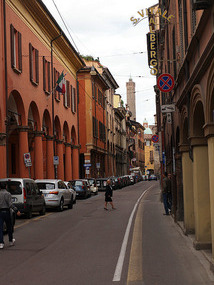 Of course, the other thing Bologna is known for is food and it's all true, the food here is great. Some of the places we ate at were Ristorante Cesarina in the city centre, traditional Italian food, nice atmosphere and good value; Ristorante Bitone Enoteca, more up market but great service and food and beautiful décor (see photos below including one with the owner) and Il Sellaio, a fantastic pizza restaurant very close to our hotel.

One highlight of our stay was a walk to the Santa Luca Basilica. This is a church on top of a hill outside of the city which is reached along a 3.5 km portico straddling the hillside. This portico has 666 arches, too many steps to count and is about 350 years old. It took us about 2 hrs to walk to the top from our hotel although the actual walk up the hillside was about 1 hr. Great views from the top except of the old town - very clever these places, they build the churches so they get the best view and can sell you the postcards. The interior is spectacular and they actually allow you to walk right up to and through the high alter which is very unusual.

The other thing that has to be mentioned is the amount of graffiti all over the place but surprisingly it is not on the landmark buildings, it is mainly on shop shutters and the like. Some clever shop keepers have in fact had their shutters painted by graffiti artists so they are no longer targets.

We did leave Bologna for a day trip to Florence which is the next post.
Other Entries
-

MIssed Bologna, but looks like its worth a visit! Next time...