-
The trip from Bologna to Florence is about 100 km and takes 37 min by fast train which run about every 15 min. Nearly the whole trip is through tunnels so you only get fleeting glimpses of the countryside. 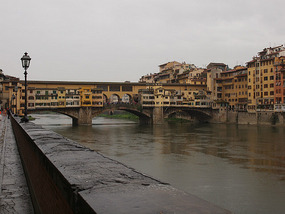 Ponte Vecchio
. Now this was still April and yet the place was already crowded with tour groups and school kids everywhere. I know Sue and I are less tolerant that previous times, but the crowds were ridiculous – July and August must be unbelievable.

We spent a couple of hours walking round taking in the sites but our main reason for the visit was to go to the Uffizi Gallery to see the Botticelli paintings. Like any others, we had cleverly pre-booked our tickets online for a 12:45 entry. We were told by one of the staff we should line up to exchange our vouchers for tickets at about 12:30, but being careful we returned at 12:15 only to have to get on the end of 100 m line. Eventually we got into the ticket office at 1:20 where a single person was exchanging pre-booked vouchers for tickets. We then had to go across the road and join another 100 m line for entry which was about 30 min later. From the time we lined up, got our tickets and went through security, it was about 2 hrs. Unbelievably chaotic and annoying – no organization whatsoever - NORMALE 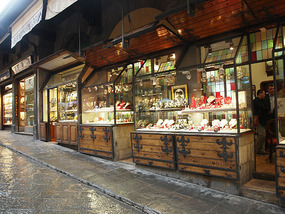 Gold Shops on Ponte Vecchio
. So much for us being so smart, pre-booking and expecting no hassles, although apparently if you don't book, it takes even longer to get in.

Now the Botticelli paintings are worth seeing as they are magnificent. As for the rest of the gallery, there were lots of renovations going on and a number of the other great paintings mainly by Caravaggio and Raffaello, were not on display. Seriously, if you don’t want to see the Botticelli paintings, go to the Pitta Palace which has a great collection of masterpieces. They don’t allow photos inside the gallery although I did manage to get a couple of shots in with the mobile just to prove we had seen them. On two occasions, Sue was explaining the brush strokes of a couple of paintings and we went too close setting off the alarms. The views from the gallery are stunning and at least they do allow you to shoot through the windows in a few places.

Before catching the train back, we visited the Duomo which is quite unique due to the façade of marble. It’s actually quite plain inside and not as decorative as some other major cathedrals in Italy. There are actually three separate buildings, the main church, the baptistery and the bell tower. We often just sit quietly inside these cathedrals for a short time but in this one all the chairs are roped off – so much for peace and tranquility.

So although well worth doing for the Botticelli’s, our visit to Florence was quite a hassle mainly due to the crowds already there, especially those damn tour groups with their leaders holding up umbrellas. If you are planning to visit Florence our suggestion is go as early or late in the year as possible, eg, March or October and even though the weather may much cooler, the experience will be better. We have also been told it is the same nowadays for Venice
Other Entries
-

Thanks for the wonderful photos and great commentary! Wish we were there too! Lots of walking and even shopping, eh Renze?
We are enjoying your blog!!

I love reading about your travels. I am living vicariously through the both of you. Be safe, have fun, send more info soon. Angels on your day J and K

Aah! Firenze. Well the Uffizi was closed when we were there in October 1996 and I missed out on seeing the portrait of Niccolo Machiavelli. But we climbed Giotto's tower and what a view. I'll never forget the 5am departure from the Pensione Sorrelle Bandini in the dark (to get a head start on seeking out better accommodation). Through the mist and diffuse street lighting on damp cobbled streets and coming upon the Ponte Vecchio with the wooden stalls shut and locked and (hilariously) realising which bridge it was because of Disney's Pinocchio cartoon which depicted it to perfection! I must get out Room with a View again! I also remember the Il Duomo controlled panic attack looking down from the balcony (how many feet up?) onto the beautiful floor while slowly moving towards the steps taking us up and up to the cupola! Definitely worth it. It was rainy then too, but it still looks beautiful. Lovely to share your trip. Lily xx

HI Sue and Renze,Sandra and I are both looking forward to trace your footsteps through Florence...I just hope our guide doesnt wave an umbrella in the air...