-
We arrived in Verona and immediately took to the streets. This is a great walking city as it has lots of walking streets in the centre. Obviously Verona has lots of attractions but it is easy to see it is also a wealthy city, as the shops are amazing, all the big names as well as wonderful local shops. The shop window displays are worth looking at without even going in although Sue found that impossible. A designer shop to a women, is like the Sirens were to Odysseus, but we men can't really strap them to pieces of timber and drag them past shops screaming and yelling. We did manage to do some sightseeing on the first day. There are lots of historic things to see but found the houses the most interesting. People take a lot of pride in making sure their houses are well cared for. Even our hotel, the Opera Relais de Charme, which is a small boutique place of only 8 small apartments, each of which has a different opera theme and mural, ours being Rigoletto – see photo.

To visit the main attractions, it is worth getting a Verona card for €15 which allows you to visit a number of different attractions 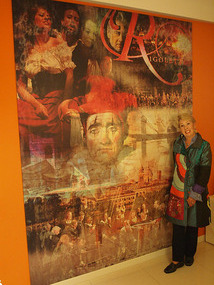 Mural in our apartment
description
.

Of course, you can’t go to any of these places without sampling the local food and Verona is no exception. In a previous visit, we had stumbled across Antica Bottega del Vini, a wine shop/restaurant so we had to go there again. The wine bar was started in 1890 has a wine list of about 60 pages with 2,600 different labels which are held in a cellar of 18,000 bottles. Mind boggling and impossible for people like us who don’t know all the different Italian wines. So you pick red or white, you choose a region, pick a price and hope. We actually did OK. The highlight was one of the waiters showing us the cellar.

The second day here we went across the river to Castel St Pietro which is on a hill overlooking the city. Lovely walk but unfortunately the castle is being renovated and was closed. Did get some nice shots looking down on the city and of some of the other attractions.

The third day here we did more exploring. We went into the Verona Arena which is amazing and extremely well preserved. It is not hard to imagine the gladiators and the fights from centuries ago. It is now used for concerts, including Sting later this year, and opera. This year is the 100th anniversary of Opera in the Arena which will be celebrated with a concert by Andrea Bocelli, Placido Domingo and Jose Carreras – how good would that be!!! Other highlights were Juliette’s balcony and for Sue, an exhibition of romantic clothes and paintings in the Capulet House 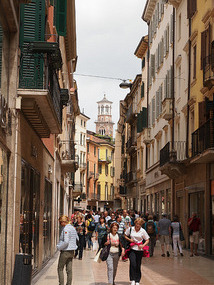 Via Giuseppe Mazzini -- main mall Verona
. Shakespeare actually never came to Verona and he based his play on a story from the 13th Century of the rivalry between the two families, the Capulets and the Montagues. In the photos you will see costumes and furniture of the time. Also just near the Capulet House is an excavated section of road which shows the level of the original city at Roman time. The city is now about 3 m (10 ft) above where the Roman’s lived. Dante was also an important visitor here and there is a prominent statue of him in one of the man squares. He traveled around the whole of Northern Italy and stayed wherever someone would give him a room but now everyone claims him as theirs.

We had dinner at the 12 Apostili Ristorante. Found this on Tripadvisor but what a find. To start with the food and service was fantastic but the highlight was being shown the cellar by the owner. OK there are a lot of bottles but the amazing thing about this place is that a few years ago when doing renovations, they discovered they were actually over the remains of two Roman churches. The owner has researched a lot of this and built a model of the original structures – see photo. Also a lot of the original walls can be seen. However, some of the stone also came from the Arena as an earthquake in 1117 destroyed a lot of the structure, especially the top 2 levels and the stones were used elsewhere including here in later buildings works now under the restaurant. A truly unforgettable night. Many famous people have visited this restaurant over the last 200 years.

I cannot resist one comment and I am not being sexists!! Italy still has a relatively high percentage of smokers especially among women. Now when Italians go out, both men and women, like to dress up and they have a great sense of fashion. Where we are sweltering due to the heat, they are looking cool in their designer clothes with their scarves and sweaters over their shoulders. The women look especially great, until you get too close and see what lying in the sun and smoking has done!!!! However, as someone once said, "In Australia and the US, we live to work but in Italy, they work to live". They know how to enjoy themselves.
Other Entries
-