-
The train trip from Verona to Milan is 80 min through some beautiful countryside quite close to the mountains. You travel past Lake Garda and in the distance we could still see snow on the mountains. 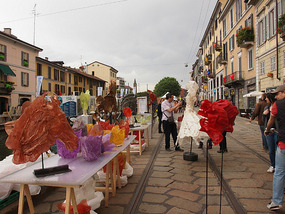 Many people may not know that Milan used to have many canals. The stone for much of the Duomo was floated down from the mountains more than 100 km away. There are only a couple left, which are in the Navigli area of the city. On the Sunday we arrived there was an art show there so we rushed out to see it. There were about 200 artists on display but a lot of the stuff was disappointing, with only 4 artists who hit the mark. The most interesting was one who made figures in fiberglass – see photo. The area also has lots of restaurants and on the weekend live music and other entertainment. It is really lively at night. There is also the remains if a canal near our apartment with an old lock attributed to Leaonard da Vinci.

The main part of the city is around the Duomo which is also where La Scala is located. The cathedral is second in size only to St Peter's at the Vatican. It is very ornate on the outside. We will be going in later in our stay 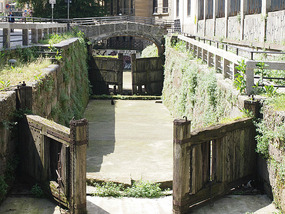 Old Lock Near our Apartment
description
. Next to the Duomo is the Galleria Vittorio Emanuele II which is the oldest shopping mall in Europe. Beautiful structure especially the roof. As you come out of the mall you can see La Scala across the road. Actually the opera house is very plain on the outside but apparently magnificent inside. We plan to do a tour later in our stay. Around the Duomo and La Scala there are quite a few street entertainers and we were fascinated by a guy blowing huge soap bubbles.

The Museo Pinacoteca is one of the best art museums in Italy. It is in the Pallazo Brera which also houses the Brera Academy which is regarded as one of the world’s leading academic institutions. The gallery contains a huge collection of Italian paintings as well as a Rembrandt and a Joshua Reynolds. They actually have so many paintings many have to be stored as there is not enough room in the gallery which is huge anyway. There are lots of alter pieces and many religious paintings which begs the question – How many churches are there in Italy and how many don’t have Alter pieces???? LOTS and LOTS 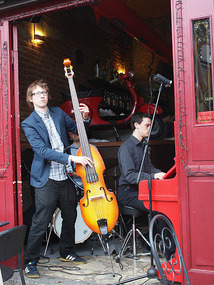 Our favourite painting was Il Quarto Stato by Giuseppe Pellizza da Volpedo which was used in the opening credits in the great movie, 1900.

The Pallazo also has an enormous library with four rooms filled with thousands of books dating back a couple of hundred years. We were able to just walk around the rooms although we weren’t game enough to take one of the books to read. We only got a stern look once because I think we walked into a room where the students were having an exam!!!!

Another part of building houses an Observatory which includes a museum on old telescopes and other celestial bits and pieces. One of the photos below shows an exploding star.

The Brera area where we are staying is quite close to the centre of Milan and thus, near the two of the famous shopping streets, Via della Spiga and Via Monte Napoleone. How could I divert Sue from this area. What excuse could I find to go in another direction!! Unfortunately my actions were not quick enough and in we went – a woman on a mission and a guy helpless to resist

Although we did go into some shops and were mainly treated like poor peasants who shouldn’t even think of contaminating these exclusive establishments, (remember Pretty Woman) we mainly window shopped 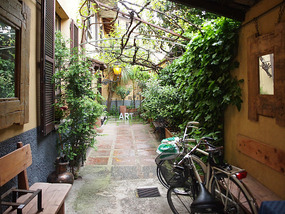 Entrance to Art Colony
. A couple of places were really nice, one being a new Pirelli store, yes as in tyres. Last weekend the 50th anniversary of Lamborghini was celebrated in Milan and there were quite a few on display in various shops including the Pirelli shop. There was also a road version 1974 Lancia Stratos which is worth about $400,000. Of course, most of you would prefer the rally version of the same car which you can pick up for a cool $4 million.

The shop windows were exquisite with undoubtedly Dolce and Gambino being the best although the display of the Girl on the Bike pulling a Carriage in Moschino was very pretty, as was a Murano glass shop. Unlike our friends Gavin and Jenni who went to Paris last year told us "We have solve the European Economic Crisis" we only bought some plates and a table cloth from Zara Home. However, remember we still have to visit Paris later in the trip, and Rebecca will be there with us!!!!!

That evening we caught up with our friends, Tony and Ann from Australia and went to Bebel’s, a local restaurant just around the corner from the apartment 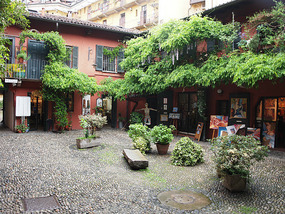 The Art Colony
. Fun night catching up with all the information from back home.

Sempione Park is one of the largest parks in Milan with lawns, lakes and some interesting buildings. There is also Sforza Castle, previously a fort but now housing a number of museums. Originally built in the 14th century, it has played a major role in Milanese history. There have been a number of additions over the century and large rebuild after being severely damaged in WWII.

The castle now houses a number of museums which are worth visiting, especially as entrance fee to all them is only €3. We visited a number of these including the Museum of Ancient Art which contained statues, frescos and tapestries from 14th and 15th centuries and the unfinished marble statue “Pieta Rondanini” by Michelangelo (1516). Another was The Museum of Musical Instruments which houses an amazing collection of instruments from as early as the 16th century. The final museum we visited were the Pre-historic and Egyptian Section of the exhibitions. Some of this stuff was from 7th millennium BC. I’m not really into this really old stuff but the Egyptian exhibition was especially interesting especially the mummies, sarcophagi and death masks. We plan to go back as the art and furnishing sections were closed. Well worth a visit.

Finally, there is a view from our window looking down the street. In the other direction there is an intersection with a coffee shop and two restaurants which is fascinating from about 8pm with lots of action.
Other Entries
- 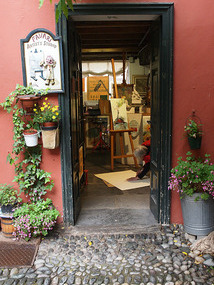 Milan is certainly full of history and of course the Sforza family included a pope, I think.
What a surprise to have a Pirelli tyre store in the fasion district - at first I thought you meant a Pirelli fashion shop as Pirelli was a brand of the finest wool knit suits that I remember one of my early employer's wives wore a lot.
Fortunately you are both enormously fit because you are on the move all the time!
Lily xx