-
Lake Como is less than an hour train ride from Milan and from our previous visit there in 1999, we could not resist going again.

We arrived in Como and wanted to take the funicular to Brunate, a small village high above the town 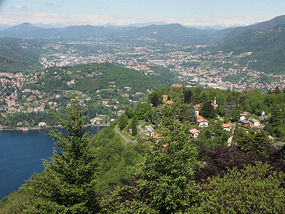 Como from Brunate
. Unfortunately, it was out for service and thus we had to take the bus. This basically left us no time to walk around so we took a couple of photos and had to leave to catch the ferry. Speaking to some people later we missed a lovely walk along the ridge to Lighthouse Volta where there are some incredible views to the lake.

We bought day tickets for the ferry, which enabled us to get off and on as we pleased. Now if you want photos, take the slow ferry and you can sit on the deck whereas the fast ferry is completely enclosed. We went from Como to Varenna, where we got off to walk around and have some lunch, then to Bellagio for a 2 hr break and further sightseeing and then back to Como. The trip to Varenna, which is about 2/3 the way up the lake, takes about 2 and ¼ hrs to get to. To give you an idea of the scenery, we took over 400 photos during the day and have had to cut them down to reasonable number. There is so much to see and marvel over, it is almost indescribable, especially as we had the perfect weather

Como
. So I can only describe what we thought were some of the highlights. Again it is all about the photos attached.

The scenery is amazing with small towns on the coastline, sheer cliffs and then the Alps in the background still with a small amount of snow.

From Como, the first recognizable site for us was Villa D'Este, one of the world’s great hotels. Sue has always been fascinated with this place after reading about it when she was a little girl. In fact, when we were here in 1999 we looked into staying there for one night but when we inquired at the hotel it was fully booked except for one room at €1200, yes about $1,500 – remember this was 14 years ago!!. Rooms started at about $900 per night. So Sue made a huge decision, not to stay but instead we went to Como and bought a Ferragamo suit for somewhat less which she wore for years. One night in a bed compared to many years wear in the suit was a pretty good deal, The other funny thing was we saw a very distinguished gentleman from New York trying to do a deal because he wanted to pay the bill in cash

Town on Lake Como
. The staff were not impressed and did not budge much to his chagrin.

George Clooney has a villa just down the road.

The next part of the trip just becomes a blur as your brain tries to take it all in. There is villa after villa, mansion after mansion, churches, towns, mountains and boats. There are a couple of houses which were our respective favourites which we have noted in the photos.

As the ferry criss-crossed the lake, we remembered lot of the places we had seen previously. The ferry did stop at Menaggio which is where we stayed and there is a photo of the Buena Vista Hotel where we stayed – one of the middle rooms on the second floor looking right down the lake and the swimming pool. From there we went to Varenna, again one of those small, idyllic villages, where we had lunch and reflected on how lucky we were.

Our final stop before returning was Bellagio, which is at the intersection of the three branches of Lake Como and the favourite tourist destination on the lake. It has some nice restaurants and shops and another feature hotel, the Villa Serbelloni which is right on the point of the branches of the lake. If you looked hard, some of the shops have interesting stuff at not so outrageous prices.

We then caught the fast ferry back to Como and finally arrived home – a long day but well worth it.

We did manage to get the 400+ photos down to less than 50 but had to discard a lot of amazing scenery.
Other Entries
-

As usual, I am jealous, really jealous. What beautiful country for such beautiful people, and I do mean you two. You have one smart cookie there. Sue knows that a Ferragamo Suit is the better deal. That's my girl. Angels on your day J, and K.

My, my, my....Renze you are amazing. How articulate you describe the scenery, ambiance, and detail your experience. You give excellent insight to transportation & places to see along the way. Roy & I enjoyed Italy so much and now having the opportunity through your eyes to revisit and view new venues I know we will return. Thank you for the blog. All the best and looking forward to seeing you both in August. Stacie

We also love Lake Como & particularly Bellagio.....& Venice, Florence, Verona,...
Come to think of it, we love travelling
Great photos, keep up the good work, we're enjoying all of them.