-
Another day, another trip. We had met some Australians on our cruise on Lake Como and they had recommended we visit Santa Margherita. You stay here when visiting the Italian Riviera to avoid the ridiculous prices in Portofino, but more about that later. It is just over 2 hours by train from Milan. This time we learnt from our experience on Lake Como and decided to stay overnight. It was raining very heavily when we left Milan, but luckily stopped when we neared Santa Margherita. As if the weather wasn't bad enough, we thought the trip was going to be a disaster as Sue was pickpocketed at the station of about €70 by two girls – it was very clever as she was in a crowded elevator and they kept bumping into her. The money was in her zipped small bag but they still were able to get into it, so the morale is keep even bags hidden in confined spaces. It’s very upsetting but you just have to move on.

When we arrived, although it was overcast as you can see from some of the photos, it only actually rained overnight during our stay 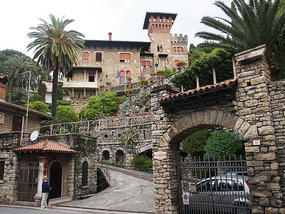 Hotel La Vela
. We had booked the Hotel La Vela because it was not only reasonably priced, but looked rather interesting. It is built like a castle including a tower. The place had lots of character and our room had a fantastic view down to the harbour.

It was only a short walk to the town centre of Santa Margherita but it was not at its best in thegrey, overcast weather. We went there again the next day before catching the train back to Milan and it looked completely different in the sunshine. Quality shops and some of the food and confectionary shops were amazing. Luckily, Sue restrained me or else I would have bought something from every shop. I reflect on what would have happened if they were fashion shops!!

From Santa Margherita we caught the bus to Portofino which is about 5 km away. Tickets are €1.50 so excellent value. Portofino is the jewel of the area. It was a small, isolated fishing village until it became a playground for the rich and famous in the 1950s when celebrities started visiting 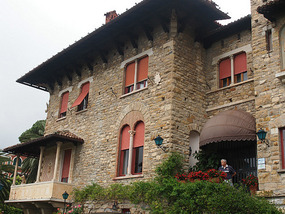 In front of Hotel La Vela
. It is extremely picturesque but what a ripoff!. Now we are fairly worldly and know famous haunts can be expensive but never have we experienced anything like Portofino. We decided to have a drink and a light lunch on the waterfront at a place called Ristorante Delfino. Great location but the cost for 3 glasses of house wine and 2 small pasta dishes was €101, about $140. They charge €6 per person cover charge and add 18% "Portofino Tax" onto the bill. Our waiter even had the audacity to say the tip was not included!!!! This is apparently a family run restaurant and we found out why it was so expensive. The wife of the owner kept posing in the doorway and she had obviously just had a face-lift and thought she looked fantastic with her tight jeans and low cut blouse. Unfortunately, it one of those facelifts that doesn’t quite work, so she looked like something out of Avatar. Piece of advice while traveling – always look at the menu before going in (we normally do but just forgot) and if possible check Tripadvisor 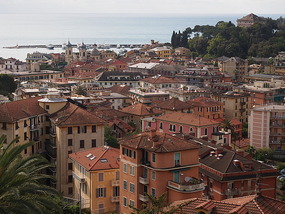 Room with a View
description
. It states quite clearly how expensive this place is.

The rest of the afternoon was spent walking up the hill around the bay to the Church of San Giorgio which dates back to the 12th century and a lighthouse, Il Faro, on the point of the promontory. You get the amazing views looking down on to the town from the courtyard in front of the church. We did see one gallery with a very good artist, Lorenzo Cascio, who paints in mixed media as well as does bronzes. He did the doors in the photo of the church with Sue.

That night we needed something local and quiet and the hotel recommended a family restaurant, the Trattoria degli amici which was about 4 km above Santa Margherita in a small town, St Lorenzo della Costa. Fabulous food, 2 courses each of very large serves all for €60 including the 1 ½ bottles of wine (we needed this after our bus ride back from Portofino with about 40 screaming Italian school kids crammed in as well as many adults but that is another story) and our tip. The downside was that we found out how expensive taxis are in this area.

Of course, the sun was shining the next morning as we had to leave. We did have time to walk around Santa Margherita again and as noted earlier, saw how beautiful it really would be when all the flowers are out and everything is buzzing.

From the limited time there, our conclusion of the Italian Riviera was that we would like to go back but have our own car and stay in the small hillside villages just out of the main tourist towns. From what we saw from the train and going to the restaurant, they look wonderful.
Other Entries
- 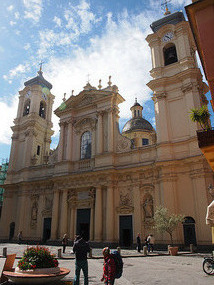