-
We did a day trip to Serravalle, the designer outlet halfway between Milan and Genoa. If you are familiar with shopping outlets in the US, you will be disappointed. Although all the designer shops are there, they either have no stock or it is basically at full price. Don't bother. There are a couple of others in the area which may be better. 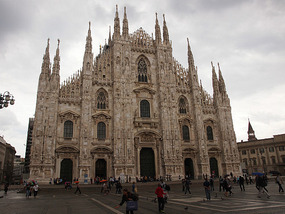 Duomo, Milan
. The Duomo is huge and very ornate. Construction was started in 1386 and took nearly 600 years to complete. The marble for the façade was transported from the mountains along the canals which ran through Milan and the surrounds. The most interesting parts in the interior are the individual chapels and the massive organ. There are also a number of crypts underneath the church housing various important relics and the burial places of amongst others, Saint Carlo Borromeo (1538 – 1584) an important church reformer of his time. There is also a nail supposedly from Christ's actual cross.

We did an organized tour of La Scala which included the main auditorium and the museum (you can do it much less expensively without the guide but mistakenly thought we would be going backstage). It is an interesting place because the exterior is very plain whereas the interior is very plush. The reason for the plain exterior is that originally the road in front was very narrow and so the architect thought there was no reason to have a grandeur building 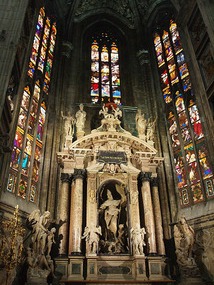 Small Chapel, Duomo
. The buildings across the road were demolished during the development of the Galleria Vittorio Emanuele II which links the Duomo to La Scala and now there is the Piazza Scala from which you can see the whole building easily. The museum features paintings and instruments from throughout the history of the building. There were also costumes from one of the performances of Aida. All costumes used in the various operas are made onsite and kept in permanent storage.

Our apartment borders an area called Porta Nuova which is being developed into a new commercial and residential area. The style is very modern but seems to fit into the area and is linked to the older surrounds by the Porta Nuova gate and a Corso. In one of the original buildings along the Corso, there were winning photos from the 56th World Press Photo Contest 2013. These were selected from 100,000 entries with the winning photo being of the funeral of two boys in Gaza. A lot of the photos were of fighting in the Middle East and in Africa, very graphic and very sad.

We were very impressed by a development designed by the world famous architect, César Pelli, of three high rise buildings surrounding a plaza, Podio Square. The buildings are both commercial and residential and although minimalistic in style, it has been softened by the water features and will eventually have some green areas as well. The test will be what it looks like in 20 or 30 years’ time 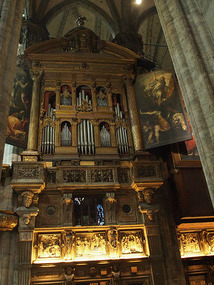 Organ, Duomo
. At the moment the design is quite inspired.

You cannot visit Milan without making an effort to see Leonardo da Vinci’s masterpiece, The Last Supper. This is painted on the wall of the refectory of the Convent of Santa Maria della Grazie. It was painted between 1495 – 1498, using a dry wall technique instead of the usual wet plaster technique used for most frescos at that time. This has resulted in the painting being very fragile and has had to be restored a number of times, the last taking 20 years between 1979 and 1999. The building also took a direct hit from a bomb during WWII but miraculously, the wall survived – see photo. One really interesting feature of the painting is that Leonardo may have used his own portrait for the face of one disciple, Jude, second from the right. We could not take photos inside so I have grabbed one off the net although it does not show how great a painting it is with its perspective and colours.

The Milanese absolutely adore the great composer, Giuseppe Verdi. He lived here for much of his life and many of his works are associated with La Scala. However, in many ways his greatest legacy was the financing of Casa di Riposo per Musicisti (Casa Verdi), a rest home for retired opera singers and musicians which still continues to this day. Verdi became extremely wealthy during his life and all his money went to the building and setting up the house which is now supported by royalties and benefactors 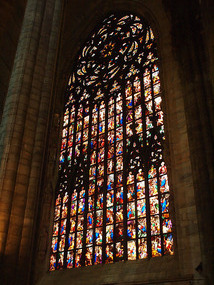 Stained Glass Window, Duomo
. There are about 100 retired artists living there as well as about 20 very gifted music students from around the world. Verdi died in 1901 and did not want to disturb Milan’s working life so had instructed that his funeral be either very late or very early. It was held at 6 am and despite the hour it remains the largest public assembly of any event in the history of Italy.

We had been told by the tour guide from La Scala that there was a free concert on Saturday and so we first visited the beautiful mosaic Verdi crypt where Verdi and his wife are buried and then went to the concert in the hall within in the house. The music was performed by the Сarabinieri band (Italian Military Police). Many of the audience were current residents. It was very special and we felt privileged to be there.

At various times in its history, Milan has been a wealthy city, and even though it does not have the artistic reputation of some other Italian cities such as Florence and Venice, it has a number of historic buildings which are worth visiting.

The Poldi Pezzoli is a large 19th century mansion which houses an extensive art collection of Italian and Flemish painters including 2 Botticelli’s. The house was severely damaged during the war but has been completely restored. The two Botticelli paintings are an interesting contrast as one was painted in the style he developed during his most productive period and the other one later in life when his paintings became dark and brooding.
Other Entries
-