-
We spent nearly a week on Lake Maggiore and so I will divide our time into two sections, roughly following each day, and post the details in two blogs as we visited lots of different places.

After finishing Renze's conference in Milan, we went to Stresa on Lake Maggiore which was a 90 minute bus trip

Lake Maggiore
. Despite its name, Lake Maggiore is not the largest lake in Italy, that honour going to Lake Garda near Verona. However, like all the major lakes in Northern Italy, it is unique and spectacular. The lake starts at the foot of the Alps in Switzerland and runs 70km south into Italy. Stresa is one of the many small towns dotted along the lake.

We actually went to Stresa as there was a one-day seminar at a post-congress meeting. So while I attended the meeting and did some work, Sue explored the town and planned our adventures. 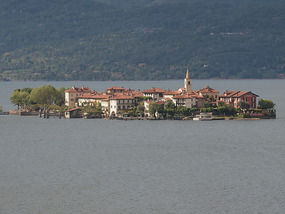 Isola Superiore from Our Hotel Sunroof
. There is a 200 yr old Cypress in front of the palace which was described as "the most beautiful tree in Europe". The tree was actually knocked out of the ground by a storm some years ago but was saved and has been replanted although is not as shapely as it once was. We really enjoyed walking through the palace as it still has a lot of the original furniture and looks almost like it is still lived in. There is also a spectacular puppet collection.

The next island we visited was Isola Superiore which is the only one of the three that is inhabited, all year round. The island includes a hotel, restaurants, shops and some very quaint buildings. We had lunch at a small local restaurant overlooking the water.

The third islands, Isola Belle and contains a large palace built around 1650 and the adjoining gardens. The palace is a lot more formal than the one on Madre and we thought rather cold and uninviting although it did contain some nice paintings and furnishings

Lake Maggiore
. All three islands can be reached by public ferry or you can do them by private launch quite cheaply as they circulate between the islands and Stresa.

The next day we decided to go to Mottarone, a mountain close to Stresa, which is at 1,491m (nearly 5,000 ft). The summit is reached by two cable cars and then a chair lift. This was Sue’s first ever ride in a chair lift, as she is scared of heights but managed this one very well. From the summit there are views of 7 different lakes within the area. The video shows the views. You can imagine during the winter, this being a popular skiing area.

Some visiting ladies had told Sue the walk down to Stresa was not too difficult and had some amazing views so we decided to do likewise. What we didn’t know was there are different starting places and we started right from the summit. The walk took 4 hrs, all downhill, over some fairly rough tracks and approximately 20 km in total. Yes, there were some spectacular views including the one of Isola Belle shown in the photos but it wiped us both out completely and we were very sore for about 3 days.

Before starting the next post, I must tell you about the hotel we stayed at in Stresa, the Hotel Royal. It is a lovely place to stay but what makes it even more special, is that it is owned by the Rosa family and Mr Vittorio Rosa is a renowned artist, who has won a number of awards and medals for his work, and his paintings are all over the hotel including in every room. Sue loved his work and the amazing variety he was able to express.
Other Entries
-