-
Despite hardly being able to walk, the worse thing to do is stay in the hotel and feel miserable, so the next day off we went again, this time a ferry trip to some of the neighboring towns. We soon found out the ferries on Lake Maggiore are nothing like those on Lake Como and it is almost impossible to travel the whole lake in one day from Stresa. The schedule is complicated and very disjointed with only a few long trips mainly on weekends and holidays. We did find out that you can do "The Maggiore Express" in which you catch two trains to Lucarno in Switzerland at the top of the lake and then a ferry back to Stresa but again on a restricted timetable so we missed out. Apparently well worth doing and on public transport so not too expensive. 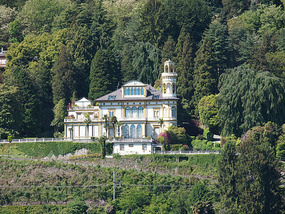 Villa, Lake Maggiore
. At Verbania there are the Taranto Gardens which we found very disappointing (entry fee €10 each!!), especially compared to those on Isola Madre. The ferry trip is very pleasant and some of the villas are amazing. From the gardens we walked a couple of kms on the coastal walk to Pallanza where we had a pizza and caught the ferry back to Stresa, only to jump onto another that went across the lake to Santa Caterina which is famous for its convent first built in the 12th century and in its present form in 13th and early 14th centuries.

The weather had been threatening for a few days but we had been lucky so far. The next day our luck ran out and it rained quite steadily so we took time out to relax and just take some short walks near the water. That night we had the best meal we have had since the 12 Apostles in Verona. It was at La Botte in the heart of Stresa, really authentic, great local food and friendly staff who looked as though they were enjoying themselves. We had to wait outside for 15 min to get a table and the owner, who is also the chef, gave us a glass of prosecco each 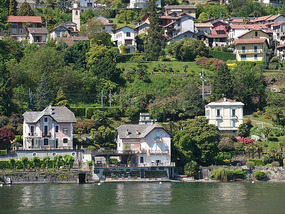 The next day the weather had improved enough for us to get out again and the forecast indicated the weather north was a better option than south. So we decided to take the train to Domodossola which was about 30 min from Stresa. The trip takes you along the lake's edge and then through a valley in the Alps with lots of villages and hills towns. One feature of the area are the marble quarries which can also be seen from the train. The centre piazza and surrounding streets of Domodossola is medieval, with many ancient building and statues – very photogenic.

On the train we had seen a really interesting town, Vogogna which was on the side of the mountains, so caught the train back to there. Again medieval buildings dominated by the Visconti Castle, built in 1344 which overlooks the town. Very quiet when we were there but apparently a tourist attraction during the summer.

Our final stop on the way home was Baveno which is the town next to Stresa. It is famous for supplying the red marble used to build the Galleria in Milan and other important buildings in Italy. There are a row of historic villas and castle built in the 19th century near the town. It is here we saw the lady policewomen with the sub-machine gun as shown in the photo!! She was part of the Carabinieri.
Other Entries
-