Geneva and Other Places Nearby

-
We arrived in Geneva by train from Stresa (about 3 hrs) after a wonderful ride through the Swiss countryside – mountains, snow, rivers and little villages. One surprising thing we saw was the amount of vineyards at the foot of the snow-topped mountains. Switzerland is not exactly known for producing wine but they certainly grow a lot and apparently drink most of it themselves so do not export a great deal.

Geneva has been disappointing 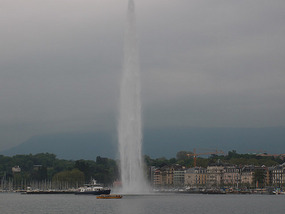 Jet d'Eau fountain, Geneva
. It has the lake but the city is really a commercial town full of banks and top brand watch shops everywhere. It is the home of many International organisations, so I guess lots of people are on expense accounts. It is very expensive, for example, the €4 - 5 pizza in Italy costs Chf 20 here (three to four times as much) and when we tried to buy a simple corkscrew which was nothing special, admittedly at a household shop, it was Chf 35 (about the same in $). Eventually bought virtually the same thing at the supermarket for $5. The best example of the cost is that a Big Mac from McDonalds is CHf 11.50 (currently US $12) Sue estimates clothes are twice the price they should be even compared to Milan prices. Also the weather has not helped at it has been grey, drizzly and cold. However, we did see some interesting sites as shown in the photos. The apartment building is quite near where we are staying and for those that have been to Barcelona, it looks very much like a Gaudi design. You can also see one of the symbols of Geneva, the Jet d'Eau fountain 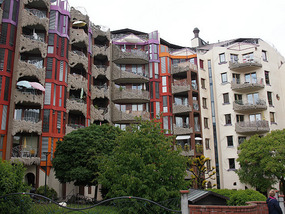 We decided to venture out and go to Yvoire, a small village on the French side of Lake Geneva. It is reached by a 15 min train ride from Geneva to Nyon and then a ferry across the lake. The village is beautiful and even though the weather was poor, we really enjoyed walking around the medieval buildings, arty shops and taking in the scenery. You can see from the photos that it would be magnificent on a bright sunny day. The village dates back to 1306 and occupies an important junction between the two sections of Lake Geneva (its real name is actually Lake Léman). Found a great restaurant in one of the original buildings in the village, Les Jardins du Léman and the prices are French not Swiss. We were so impressed, even took some photos of the kitchen which was installed the previous winter. We returned to Geneva via Nyon which itself has some very nice scenery, especially close to the lake.

Our final day in Switzerland was a Sunday and everything is closed so we decided it was an opportunity for another day trip, especially as the weather had significantly improved 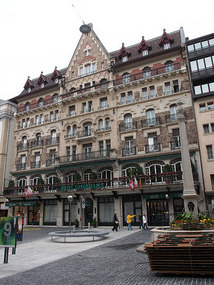 Hotel Longemaile , Geneva
. Sue had previously visited Bern with her parents so we took the morning train there. Of course, as we traveled further north the sun disappeared behind thick cloud but at least it wasn't raining. The haze affects the photos a bit but we still thought they were worth sharing.

Of course, Bern has changed since Sue’s last visit and everything was closed there as well. However, the old part of the city, which is wedged into a bend in the river Aar, is very beautiful with many historic buildings and sites. The houses overlooking the river are also something to see as is the famous clock tower. It was just a shame there wasn’t more activity. There would be a lot of artistic things to see on a normal day as illustrated by the tapestry fawn and horse we were able to photograph through a shop window.

From Bern we traveled to Spiez which is a small town on Lake Thun about 30 min by train. At the edge of the lake there is the medieval Spiez Castle, dating from the 15th century which we visited. There are photos of some of the rooms. The general view of the town taken from the castle tower shows a typical Swiss small town with the multi-storied houses and the pitched roofs showing this place must get a fair bit of snow.

Interestingly, on the train back to Geneva, there were lots of people that had obviously been hiking as they had all the gear including the boots, backpacks and stocks. So we now know what the Swiss do on Sunday, they go hiking and in the winter all go skiing.

I'm sorry the weather was so dreary. Quite a difference in the new shiny kitchen and the old one in the Castle. I seems you do lots of walking to get photo shots looking down. I love the vegetable gardens on the roof tops, if that's what they are. I can tell you are not letting any inclement weather get you two down. Keep up the good work. Love to hear from you. Enjoy and Angels on your day

Rub it in guys! Missing Milan and Bellagio already. Enjoy the rest of your trip.

Rather like the "non sunny" photos - have a really interesting atmosphere. Keep enjoying! I love going along for the ride!