-
We have been in Nice for three days and after some rain on the day we arrived, finally the sun has appeared and we have been able to get around in shorts and sandals. Of course being on the French Riviera, this is as it should be. Nice is a quite a large city but has a charm to it, probably due its history and its position on a bay on the Mediterranean Sea. The seaside boulevard, the famous Promenade des Anglais, has a lot of historic buildings, our favourite being the Hotel Negresco which celebrates its 100 year anniversary this year. It is still a family run hotel and the interior is just magnificent.

Nice
. The view takes in the old town, distinguishable by the red roofs and the beachfront – incidentally the whole beach is made up of pebbles, not sand like we are used to. On the other side of the hill is the port where we saw the boat, Club Med 2 which is a motorized five mast sail boat used for holiday cruising.

On our walk through the old town we came upon a flower and vegetable market. Amazing flower and food stalls including one just devoted to spices. There were also a few painters there and a really interesting African shop. There is quite an African influence in Europe at present including household items and fashion in fabulous colours.

Nice has a number of art galleries which Sue of course had to visit. The highlight without doubt was the Musee Chagall which featured paintings of Marc Chagall, one of Sue's favourites. In the 1950s, Picasso said of Chagall, "when Matisse dies, Chagall will be the only artist left who knows what colour really is" 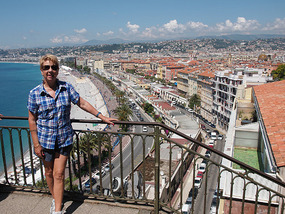 Sue in Nice
. The gallery houses a series of seventeen paintings illustrating a biblical message which were painted by the artist specifically for this gallery. They are very large and it is easy to see why he was so respected. There is also a wonderful documentary about his life and although it is in French, we were able to follow a lot of it from his early childhood in Russia and subsequent time in Paris and then finally in Nice.

We also visited two other galleries, the Musee des Beaux Arts and the Matisse Gallery. Of course, as would be expected both were being renovated and we were only able to get into a few areas. Ironically the Musee des Beaux Arts was preparing for a large Matisse exhibition starting on 21st June which is after we have left!! We were able at least to visit Matisse’s grave which is in the cemetery next to the Gallery.

Which leads me to comment on the hotel we are staying in, the Excelsior. Now if you go to their website, http://www 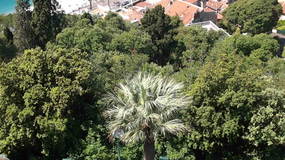 View overlooking Nice
.excelsiornice.com/en, you will see the most wonderful pictures of this hotel. It just so happens the hotel is currently being totally renovated and for instance the courtyard which is one of the reasons we booked it is full of building material and a number of the photos are what a real estate agent would call “location shots”!! Whoever designed the new interior has never stayed in a hotel as there are no drawers in the room and these ridiculous studded boxes which prevent you moving around and being able to open the wardrobe properly. We actually stuck some of these outside the room just to give us some space. The saving grace was that the beds were great.

There is no doubt we would like to come back to Nice and spend some more time here, especially with a car but would not stay at the Excelsior.

When we enjoy a place like Nice we like to have a special dinner on the last night. On a recommendation, we went to Les Viviers which specializes in fish. It is a small intimate restaurant with art-deco mirrors and decorations, very professional staff and great food.
Other Entries
-