-
For the trip from St Paul to St Maxime, our next stop, we had decided to go inland and stop at some of the villages along the way rather than drive along the coast which we knew would be slow and crowded. The first part was up the Col de Vence, a 19.5 km drive up the mountain to a height of 958 m (~4000 ft). This is a favourite climb for cyclist and there were many despite it being foggy and at time torrential rain. The climb has been part of the Paris to Nice cycle race many times. The top is covered with snow for the winter and is quite barren. Once over the top, the rain got even heavier and we had to change our plans and miss some of the villages on our itinerary. Eventually we were able to stop at Valbonne. The old town can be traced back to the iron age and many prehistoric artifacts have been found around the area. We really appreciated the coffee break in the main square. From there we went on to Mougins which is a small medieval village in the hills above Cannes. It is one of the most famous art centres in the region with lots of art and craft shops. Picasso lived here for the last 12 years of his life but many other famous people have also lived there for a time. There are many local artists with their own shops.

We arrived at St Maxime in full sunshine and checked into our hotel, the Hotel Les Jardins de Sainte-Maxime 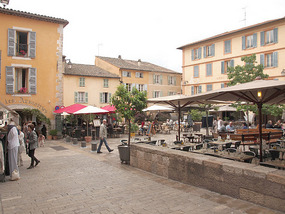 Town Square, Valbonne
. Our room had a great view straight across the bay to St Tropez and as a bonus the hotel also had a pool. Of course, we had to return to St Tropez which we had visited 20 years earlier and there is a ferry directly from St Maxime to St Tropez. St Tropez has not changed a lot in those 20 years except has got busier and more touristy. We walked into the old town through the fish market and stumbled upon a wine tasting which we were invited to join – very enjoyable. The old town is still relatively quiet which we enjoyed. Unfortunately the Spanish Castle which overlooks the town was closed for renovations. St Tropez, interesting to visit but stay somewhere close by, if possible.

For the final day of our stay on the French Riviera, we drove along the coast to Cannes. The first part after St Maxime has lots of small villages with lovely sandy beaches as well as some spectacular scenery. There are some larger town such as Frejus and St Raphael which have many high rise apartment buildings which are not worth worrying about. We found a lovely little place, Mandelieu La Napoule and had an incredible lobster lunch at a restaurant, La Palmea which overlooked the marina.

From there we drove to Cannes and in reality the closer we got, it became more congested and built up. We were disappointed as Cannes just appeared to be a large, up market seaside resort, which it actually is!!! Even Sue wasn't interested in looking at the shops here so that says something.

We were thankful for the pool when we got back to St Maxime and that night we had a salad on our balcony with a nice bottle of champagne. We actually tried to stay a further night but unfortunately the hotel was booked out.
Other Entries
- 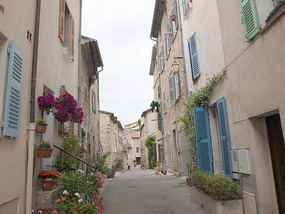