-
The area around Beaune, Burgundy, is one of the great wine growing areas of the world producing both great reds and white wines. Throughout the region there are many small villages all with a number of different wine houses with the best ones having the Grand Cru classification. Many of these offer free wine tasting and cellar door sales. The area also has a number of Chateaus, some of which can be visited while others are the actual wine cellars. The centre of Beaune is a walled city with much of the wall and battlements still intact. The major attraction in the city is the Hospice de Beaune with its famous coloured tiled roof. This was founded in 1443 as a hospital for the poor. It is now a museum which contains a artistic treasures as well as showing the history of the Hospice. There are also many other original buildings which also feature the tiled roof. You spend half the time looking up and walking into people or things. While walking around we also saw a wedding which had just taken place in the Hôtel de Ville (City Hall). 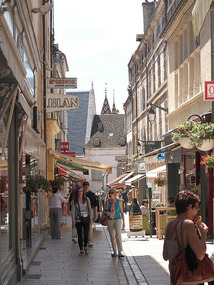 Typical Street in Beaune
. We put the furniture through the window and then had a most memorable dinner as the sun set.

The villages which are throughout the wine growing area are just beautiful. In fact we got to the stage where we kept saying "Isn't this village amazing, but then they all are". Beautiful old buildings, flowers, narrow streets and wineries everywhere. It is just impossible to stop at every village, so there are some photos from Pommard and Meursault. Meursault has a wonderful town square highlighted by the Hôtel de Ville which has the traditional coloured tiled roof which Sue drew while I wandered around the village – see the photos below of the building and the drawing. We also visited a 15th century castle, the Chateau de la Rochepot. Like many of the chateaus from this era and earlier, it was partially destroyed during the French Revolution but was then restored at the end of the 19th century. The village of La Rochepot from the chateau tower looks like a child's toy cutout – almost unreal but of course people actually live there.

Dijon is about 45 km north of Beaume and was once one of the most important towns in France as the home of the Dukes of Burgundy who controlled a large part of France, Belgium and the Netherlands. The centre is also medieval and has been extremely well preserved for hundreds of years. Parts of the centre are over 1000 years old. There also are a large number of half-timber houses dating from the 12th to the 15th century 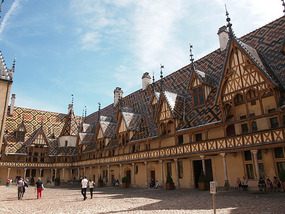 Hospice of Beaune
. And yes, Dijon mustard did originate here in 1856 when a local added the acidic "green" juice of not-quite-ripe grapes instead of the normal vinegar, the end result being the mustard we love today.

On the way back to Beaune we stopped at a couple of wine cellars - they call them wine caves. The first was the Clos Vougeot, which is the biggest wine producer in the region. The original abbey was built in the 12th century and the present structure dates from 1551. The most interesting part of a visit is the old wine making equipment including 4 huge wooden presses. We also visited the Moillard cellars which hold 1500 barrels each of which makes 300 bottles of wine. Finally, the Chateau de Corton-André cellars, housed in a beautiful building, featuring the coloured tiled roof. We were given a couple of exceptional reds to try but felt €75 per bottle (about $95) was a bit too much to or us to have one our picnics. 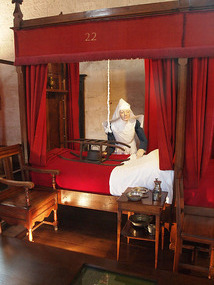 Caring for the Sick, Hospice of Beaune
. These are used for nearly everything in the vineyards including spraying, plowing and other maintenance. It turns out they are incredibly practical as they fit exactly between the rows of vines and are tall enough to go over the vines. It also explains why the vines are trailed along wire instead being alloweds to grow as a round bush.

Our final day in Burgundy was spent in the small villages around Beaune taking in the atmosphere of daily life in these quaint places. They certainly enjoy their morning coffee and lunch breaks as you see the locals and the vineyard workers sitting outside the cafes eating and drinking and discussing the latest news. However, our choice was a lake we found near one of the villages where we had a picnic lunch with a small bottle of the local wine before returning to the hotel for a swim as the temperature had risen to about 38oC (100oF). The day finished with a great dinner at a local restaurant
down the road set in the vineyards, the Auberge des Vignes.
Other Entries
-

Oh My..... It looks like you are having the time of your life. I want you to know that I am living vicariously through these slide shows and your description. I can just see how you moved the furniture through the window to enjoy your meal outdoors. We miss you here on the Island. Hurry home, be safe and Angels on your day !!!