Loire Valley and the Many Chateaux

-
We drove from Beaune to the Relais des Landes, a hotel near the village of Ouchamps in the Loire Valley between Blois and Tours and set on 40 acres of woodland. This is, of course, the region famous for some of the great chateaux of France. Our first stop was Tours which was one of the most important towns in France during medieval time as it was one of the main city in France in the 15th and 16th centuries which is when many the chateaux were first built. The city Cathedral, St Gatien, which was started in 1235 and took 200 years to complete, features a number of wonderful stained glass windows. A feature of the old town are the timber houses from the 15th century. 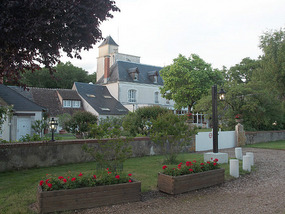 Relais des Landes
description
. For instance, there were sometimes more the one king, kings were not necessarily by accession but sometimes elected, alliances between areas in France and between France, Spain and England continually changed and members of the royal court fell out of favour and others took their place. There are also too many chateaux to visit and just outside Blois is the Chateau de Chaumont on the banks of the Loire which we managed to photograph but not visit. It is quite charming with the village houses between the chateau and the river. There is also a chateau in Blois itself which again we photographed but did not visit.

The three chateaux we actually did visit were Cheverny, Chambord and Chenonceau. Cheverny which was built between 1604 and 1634 is relatively plain on the outside but exquisite on the inside with the rooms fully decorated in the style of the time. The chateau is privately owned and parts are still lived in. There is also a pack of about 60 hunting hounds kept on the property 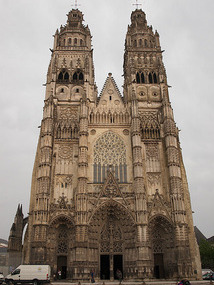 St Gatien, Tours
. Chambord was the first of the great palace with work starting in 1519 but took many years to compete as the king kept going off to fight various wars. The castle which is huge centres around the double spiral staircase which has been attributed to Leonard da Vinci but more likely was designed by one of his pupils. The two spires do not meet which apparently was great when the mistress was coming down and the wife was coming up. The interior is rather plain and cold.

Chenonceau has always been our favourite. It is truly magnificent, relatively small and built over the River Cher. It also has a fascinating history with kings, wives and mistresses all being owners of the castle at some time. At least three kings and five queens of France lived in the castle during its heyday. A lot of the interior is authentically decorated with furniture and art of the various owners. For instance, on hearing of the death of Henry III of France, his widow decorated the palace in black and funeral symbols while she only dressed herself in white. Her bedroom can still be seen decorated in this way. It is only the kitchen and a few other rooms that were renovated but even then over 100 years ago. One of the features are the flower arrangements in many of the rooms which come from the gardens of the estate. 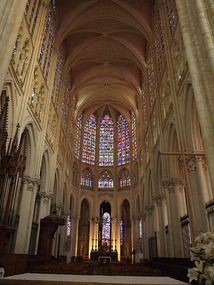 Alter, St Gatien, Tours
. Amboise is also famous because Leonardo da Vinci spent the last 11 years of his life in the town, living at the Clos Luce which is now a museum featuring models of many of his inventions. The Loire valley is also a wine growing area and there are many wineries which have cellars under the sandstone hills – fabulous temperature control!! However, even more interesting is that many of the houses built in front of these sandstone cliffs have extended rooms into the cliffs with the chimneys coming from inside the rooms up the face of the cliffs – see photos.

On our way out of the Loire Valley, we visited one more chateau which was west of Tours, Chateau Ussé. This is a privately owned castle open to the public. The most interesting parts of the visit were the attic and roof areas, the stables in which there were many old saddles and horse drawn carriages and the wine caves built into the sandstone cliffs.

To see this area is to appreciate the wealth and grandeur of 15th and 16th century France. It also illustrates just how volatile the period was with the changes in power and influence. The area was the centre of political influence and it was only later that Paris became the seat of power. It also inspires one to learn more about European history from another perspective rather than the sanitised and biased British version I was served up at school.
Other Entries
-

I commend you both. It looks as though you have maintained astonishing sobriety. I myself would have embibed at every stop. Wine there is so good and does not have the preservative chemicals added as we experience here in USA Have a FEW for me. What a lifetime experience. Salute and enjoy
Angels on your day

Keep up the good work , we're loving all the photos.
Sorry you didn't go into the Castle at Amboise, it is one of our favourites, but then again, there are so many & I'm sure you have been places we haven't.

The Loire Valley is fantastic, but so are so many other places.

Given the wild, wild west was only 150 years ago, I still think of man 200 years back as being in the stone age, but then I marvel at construction from 1000 years back & think some of these projects would still be daunting today.