Bais and Our Stay in a Chateau

-
For the first time since leaving Nice we decided not to book accommodation and see where we ended up as we drove further west towards to Atlantic coast. It was interesting as we saw some great places to stay but, as one does, kept driving a little further. Finally, we made the decision to stay in Mayenne, which is a relatively large town, but when we got there, they were having their annual celebration with their three other sister cities and there was not a spare room in the place. So on a recommendation from one of the hotels we drove out of town about 15 km to a resort, the Le Relais Du Gue de Selle and booked in there. The other thing was that the Le Mans 24hr race was on that weekend and we were only 50 km from there so lots of people were staying there from the UK for the race. You can see from the photo that these guys all drove luxury cars so in the parking lot there were Ferraris, Lamborghinis, Porches, a Bentley and our Citroen C5. The next day we explored some of the surrounding little villages including St Suzanne which is full of houses you typically see in the French villages in this area. As we had come to expect this village had the obligatory castle but what was unique were the 'risqué' signs on many of the buildings. Some years ago, a relative in the Netherlands has traced the Bais ancestry to an area in France from where they migrated some 10 generations ago. The village was quite close so of course we had to visit it. Not sure if it was an omen but it was very wet and cold there but we did get some photos. It’s a farming area and a very, very, very quiet place!!!

This time we had booked a B&B just outside Fougeres for a few nights but can you image our excitement as we drove up to see a real French Chateau, the Château de Montbrault – see the photo please 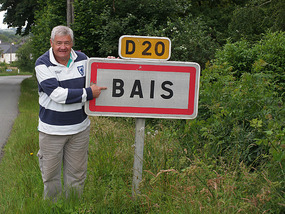 Renze's Ancetral Home
description
. We were even more amazed when we went inside and saw the rooms including our bedroom. The owners only purchased it 12 months ago and it had not been occupied in 50 years. What they have done is amazing, with wonderful French antique furniture and fittings throughout. Currently there are only 2 bedrooms available to stay in but next year there will be 4 or 5. We will certainly stay there again and I would recommend it to all of you reading this blog if you have the chance.

One of our must see has always been Le Mont St Michel, the island made famous in many novels and movies. It is an amazing place because the countryside surrounding the island is very flat and you can see it from quite a distance. It is bigger and more imposing than we had expected. The main features are the old houses and the abbey built on the highest point of the island. The abbey is huge and when you enter at the top, there are numerous levels going down with seemingly endless chapels and rooms at the various levels 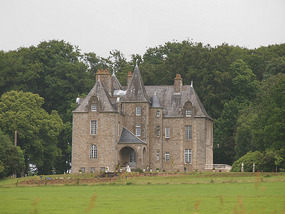 Château de Montbrault
description
. As it has been for over 1000 years, it is still a convent with monks living there. In one of the photos there is a large wooden wheel. This was used for hauling up supplies for the abbey. It works by men walking inside, similar to a mouse wheel, and hauling a sled up the wall of the abbey. Obviously the island is a must to visit but just as interesting is to contemplate how the abbey and surrounding buildings were actually constructed so many years ago.

Not too far away is sea port of St Malo, famous for its walled old city. It’s actually quite a busy harbour with both commercial shipping a many recreational boats and yachts. The old city was severely damaged by bombing during the war but has been restored in the original style. The highlight for us was the old fort on the beach and others we could see on the nearby islands. It has been a strategic location for centuries and in the past was notorious for piracy in the surrounding waters. The area is very tidal with tides averaging 26 ft compared to the normal 2 feet in most places which also explains why Le Mont St Michel can only be reached via the causeway in low tide, although a permanent higher causeway is currently being built - a bit disappointing as it takes away some of the mystique of the place 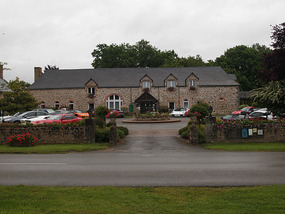 Le Relais Du Gue de Selle
. But I digress, as the advantage of such tides is that they make an ideal environment for growing oysters, so we bought 2 dozen to enjoy at the chateau, diverting first though to look at Dinan, another walled medieval town of the area. It was quite cold sitting outside enjoying the oysters but nothing could take away how great it was.

We had been into Fougeres a number of times and had not been that impressed, quite plain and a rather boring main street and square. However, after getting a map of the place, we discovered it had a wonderful original medieval part with gardens, a castle and a fort. Just a nice area to walk around and explore the sites. Typical half wooden buildings, narrow streets, streams and some very interesting ancient structures such as the 1400 year old tower and 800 year old fort.

This latest area where we have been is quite different from others already described. It is farming country with livestock and crops such as wheat, corn and sugar beet, with very little vineyards. And of course being so close to the coast, great seafood although surprising very little served in the local restaurants which tend to centre their cooking on beef, lamb and pork keeping the tradition I suppose.
Other Entries
-