-
We decided to take our time to get to Paris and despite our previous experience with not booking accommodation, we again set off with a list of a few places but nowhere really in mind. Eventually, we put one of the possible places into the GPS, but Yvette, the voice of our GPS system, had us driving through forests on dirt tracks. But then what can you do, we had put our faith in her for the last three weeks and had to continue our trust. It paid off as we emerged out of the forest and were directed to a delightful, isolated retreat on a small lake with only a small village nearby, the Relais Des Etangs de Guibert. We relaxed for two days, walked around the lake and enjoyed a wonderful meal in their restaurant. The nearest town is Mamers which unfortunately was probably the most unattractive, boring town we saw on our whole trip – Is there actually life there??? From there, we continued our travel towards Paris and again stayed in a small village, Chandelles, about 80 km (50 miles) from Paris. The place was a converted 19th century barn which had been made into a B&B. Very basic, "rustic", small rooms and disappointing actually, but you get what you pay for and it looked great on the website!!!! Luckily we had the run of the place and were able to use the kitchen and the sitting room but if there had been other guests we may have left early. 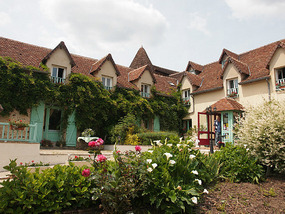 Relais Des Etangs de Guibert
. Chartres is about 25 km away and has one of the great Cathedrals of Europe and a UNESCO World Heritage site. The building and the majority of the stained, glass windows have survived intact since the 12th and 13th centuries. It even survived WWII mainly because one brave American soldier went behind enemy lines and was able to report that the Cathedral was not occupied by the German Army, saving it from allied bombing. It is worth reading the history at wikipedia.org/wiki/Chartres_Cathedral.

The main feature of the Cathedral are the stained glass windows many of which were donated by various tradesmen in the 12th century such as bakers, weavers, blacksmiths and butchers and tell stories of life at the time. Of course, there are also many religious windows. It needs to be remembered that most people were illiterate at the time and these windows were used as a educational as well as religious teaching. We were also able to visit one of the many chapels actually under the Cathedral 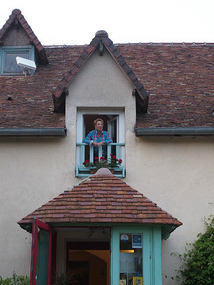 Sue from our room at Relais Des Etangs de Guibert
. The old quarter of Chartres is charming with many fine buildings and houses. We stumbled upon a very unusual exhibition by an artist, Kriki, who used to be a street artist in Paris. His art combines medieval, computer and African art to produce colourful, eccentric paintings. The highlight of the exhibition was a huge, sculpture of a goddess of the forest.

The other major attraction in the area is Chateau de Maintenon. This chateau has a great history as it was given to Madame de Maintenon, who spent 40 years as the mistress of Louis XIV and then became his secret wife. She was initially also the governess of the king's illegitimate children who lived in the castle. The castle was left to her relatives who still own it. The rooms are furnished according to the time but the major feature are the family portraits including many of Louis’ predecessors who were also Kings of France. The gardens are in the formal French style featuring an unfinished aqueduct which Louis had built to transport water to Versailles for the fountains there. Apparently, he was a quite frivolous with money and built a number of aqueducts in various parts of France which were never completed. Our stay in the region was completed by a short visit to Dreux. However, I think we are just about chateau’d and cathedral’d out and just walked around for a short time before returning back to Chandelles to watch the Tour de France – go Cadel.

Tomorrow, we say goodbye to Yvette and to our Citroen – I never thought I would say that as I they have never been my favourite car but it has been a great, very comfortable and has run very smoothly. Then, Paris, we can’t wait.
Other Entries
-

How absolutely wonderful it sounds. Thinking you were traveling in to "No Where's" land, and to find such a quaint little village. Aren't you glad you persevered? Yes but it's all going to come together for you in Paris. I am really really jealous. I love Paris so very much. I think I could live there, or Maybe just in Nice and travel back and forth. AHH such dreaming....... I'm heading to S.L.C., later this month. so I believe I will be missing your home coming. MYBAD. Once you are set up and establish in some sort of residency in Paris, will you have regular computer communications? This is Jealous Jannette signing off. Angels on your day.

Did you do anything special for your birthday, Renze?