-
We have now been in Paris for just over a week and spent the first few days taking it easy and relaxing. Rebecca joined us a few days ago and we are starting to show her the sites and sounds of this great city. The secret of Paris is just to walk wherever it takes you because there is always something new to see around the next corner. Our first excursion were the outlet stores at La Vallee Village which is about 40 min outside of Paris by the RER train. Much to my surprise, between them Sue or Rebecca bought only a pair of shorts – oh well, the girls that have everything maybe!! 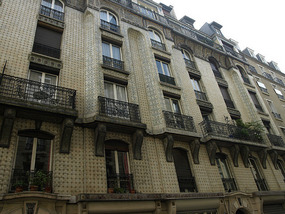 Our Apartment Building
description
. She thought it was excellent and was able to get a feel for the city, its history and its architecture. Some of the photos are from her bus trip.

One of the most interesting thing for us is that even after the times we have spent here in the past including a month in 2009, we have found areas we have never even seen before. For instance, today we went to the St Paul area which is near the River Seine in the 4th district which is one of the oldest parts of the city. It has a wall with some remaining parts of the towers dating back to 1190 as well as a "village" built around courtyards.

The other area we found was around Rue St Denis which is one of the oldest streets in Paris and was first used by the Romans by as far back as the 1st century. In more recent times it has had a mixed reputation and is rather seedy in parts but is also the centre of the Paris wholesale garment industry. Huge number of stores which we will certainly visit again with Rebecca.

I could go on forever about Paris but much of it would be cliché as so much is known about the city and so many of the sites are so familiar to everyone, it is better to just use the photos we have taken so far. I have also added more comments than usual to the photos.
Other Entries
-

Can you see the Eiffel Tower from the Cafe Del Flore? I believe I spent an afternoon there drinking fine white wines. Much time spent just simply watching people, and marveling at how many of those little tiny cars there are. Such Fun. Glad to hear from you, the photos as usual are marvelous. So nice Rebecca has come to visit. She is such a beauty. Angels on your day. Jannette