-
The most important holiday in Paris is their National Day, Bastille Day which is celebrated every year on July 14th. It was July 14th, 1789 when the Bastille was stormed but the day actually commemorates July 14th, 1790 when there was a huge feast and official event to celebrate the establishment of the constitutional monarchy in France and consolidation of France. The monarchy did not last long as soon Napoleon came along and proclaimed himself the absolute ruler of France – basically a dictatorship. The day is marked by a huge military parade down the Champs-Élysées which goes for most of the morning. It ends with a fly over by planes trailing red, white and blue, the French national colours. Spectacular display of military hardware and huge crowds. One of the interesting things I saw were the snipers dressed in black strategically placed on rooftops along the route looking for anything suspicious – the World we live in, I guess.

The evening highlight is the fireworks and concert at the Eiffel Tower, again attended by huge crowds 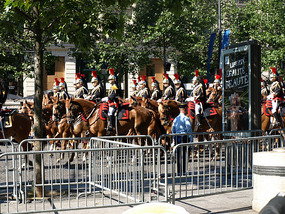 Bastille Day Parade
. This is very spectacular and Rebecca thought it was one of the most amazing events she has ever seen, even though we are spoiled by our New Year's Eve ones on Sydney Harbour. The fireworks are on the river behind the tower which is lit up at various times in a combination lightshow and fireworks. The show lasts about 40 mins and is accompanied by music synched with the display.

Again, the photos and videos do the day more justice than anything I can write, so enjoy.
Other Entries
-